Steve Blane,Americana Folk Artist and Rabbi, Goes to Confession on His New Album 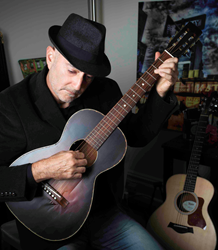 The music is in the Americana/Folk/Rock genres. Blane summons the same soulful spirituality he brings to the pulpit.

On December 11th, Sim Shalom Rabbi Steven Blane, will release his Nashville recorded album "I Confess." The original lyrics reflect Blane's musings on relationships, love and fantasy. Blane explores the struggle between faith and doubt. The music lands solidly in the Americana/Folk/Rock genres, with songwriting and production kudos to such artists as Bob Dylan, Roy Orbison, and Willie Nelson. Blane summons the same soulful spirituality he brings to the pulpit.

In another twist of unorthodoxy, the album was produced by famed Christian, Country, and Rock music producer Billy Smiley out of Franklin, TN at the Dark Horse Studios. (Johnny Cash, Steven Curtis Chapman, Whiteheart, Newsboys, and Clay Aiken).

The album will be available digitally on Itunes, Spotify, Amazon, and at http://www.StevenBlane.com.

A pre-order of the album will be available on Nov. 13th via iTunes and Amazon.

To kick off the release, Blane will perform all the songs from the album at two house music concerts on Sunday November 27 and December 11th at 4PM, plus a special show at the Rockford Music Hall in New York on Dec 29th.

The events will be streamed live at https://www.facebook.com/steven.blane.

Blane's love of music started as a young boy in Jersey City. Years later, after college, he headed to NYC where he was cast in a Broadway Show as a guitar playing gypsy. He lived in the Village, played gigs at night and wrote an Off-Off Broadway Rock Opera. He is once again pursuing his journey as a singer-songwriter, melding all his passions.

Producer Billy Smiley met Blane at a conference in Nashville, and after hearing him perform “I Confess” and “When Angels Sing”, they talked about Billy producing his album. Smiley expressed, “After hearing a lot of music that day, Steven came in like a breath of fresh air, and sang 2 incredible songs…I knew I wanted to work with him!” The two connected and decided to work on an album that was different, with a classic feel, yet undeniable, and then went through 20-30 songs and came up with a game plan to make this album a special and meaningful moment in life, capturing all that Blane’s life and journey represented.

Blane added, “I see this album as an affirmation we are all in this life together. In my heart I’ve always been a songwriter and recording in Nashville with Billy and those amazing musicians brought to fruition my life-long dream. The door is now open to what is yet to unfold.”

Be on the lookout for Rabbi Steven Blane in your town in 2017 with an incredible story of hope, loss, love, and life.

Sim Shalom is an interactive online Jewish Universalist synagogue which is liberal in thought and traditional in liturgy. Created in 2009 by Rabbi Steven Blane on Manhattan's Upper West Side, Sim Shalom offers a means of connecting the unconnected. Rabbi Blane leads accessible and short Shabbat services every Friday night using a virtual interface and additionally Sim Shalom provides online education programs, Jazz concerts, conversion and life-cycle ceremonies along with weeknight services at 7:00PM EST led by Rabbis and students of this online community.

Rabbi Blane is also the founder and director of the Jewish Spiritual Leader's Institute,
http://www.jsli.net, the online professional rabbinical program.

Sim Shalom, a non profit 501 © (3) tax-exempt organization, nurtures a Jewish connection through its mission of innovative services, creative education and dynamic outreach to the global community. For more information visit http://www.simshalom.com or call 201-338-0165.