The Inductees are being honored and recognized for their professional excellence and their exceptional contributions to the bankruptcy and insolvency practice. 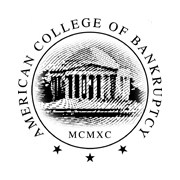 The American College of Bankruptcy announced today that the following insolvency professionals will be inducted as Fellows in the 28th Class of the College on March 10, 2017 in Washington, D.C.:

The Induction Ceremony and Reception in honor of the new Fellows will take place at the Smithsonian Donald W. Reynolds Center for American Art and Portraiture. The 30 new Fellows are being honored and recognized for their professional excellence and their exceptional contributions to the bankruptcy and insolvency practice.

The American College of Bankruptcy is an honorary association of bankruptcy and insolvency professionals and plays an important role in sustaining professional excellence in the field. College Fellows include commercial and consumer bankruptcy attorneys, judges, insolvency accountants, turnaround and workout specialists, law professors, government officials and others in the bankruptcy and insolvency community. The College offers unique and challenging educational programs and publications, maintains the National Bankruptcy Archives at the University of Pennsylvania School of Law, and, in conjunction with the American College of Bankruptcy Foundation, is believed to be the single largest financial supporter of pro bono bankruptcy services in the United States.

Nominees are extended an invitation to join based on a sustained record of achievement. Candidates are selected by the College’s Board of Regents from among recommendations of Circuit Admissions Councils in each federal judicial circuit and specially appointed Committees for Judicial and International Fellows.

Criteria for selection as a Fellow of the College include: the highest standard of professionalism, ethics, character, integrity, professional expertise and leadership contributing to the enhancement of bankruptcy and insolvency law and practice; sustained evidence of scholarship, teaching, lecturing or writing on bankruptcy or insolvency; and commitment to elevate knowledge and understanding of the profession and public respect for the practice.

For more information about the American College of Bankruptcy, or about the 2017 Induction Ceremony, contact Shari A. Bedker, Executive Director at 434-939-6004 or email at sbedker(at)amercol.org.