This fall the schools of 20 inspiring music teachers have been chosen to receive grants from Give a Note Foundation and 21st Century Fox as part of their latest collaboration to support music education. Students and others nominated these 20 outstanding educators for their inspirations in the lives of students. 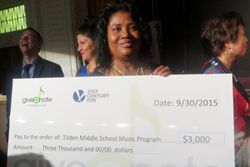 Alandra L. Abrams accepts the Give a Note check on behalf of the Tilden Middle School Music Program.

These stories cannot be told enough, and we encourage communities to support their local school’s music programs and the teachers who make them possible.

Leading into the new school year 21st Century Fox and Give a Note Foundation came together once again to present a new grant opportunity for 20 schools. The “MusicEd Idol” competition was announced last July, and schools were invited to submit nominations for “Music Education Idols” who inspired them to dream big and follow their passion for music.

Students, parents, and the general public nominated music educators by completing a short application and including a video testimonial describing how the music teacher inspired them to discover their creative potential. The stories were definitely inspiring. The influence of music educators around the nation made a positive impression on many students, and the bright light these teachers have been in their students’ lives was apparent.

Following is the list of the 20 “MusicEd Idols” whose school music programs will receive $1,000 grants courtesy of 21st Century Fox and Give a Note Foundation:

This latest round of grants continues a five-year collaborative relationship supporting music education between Give a Note Foundation and 21st Century Fox.

“Give a Note appreciates the continued support of 21st Century Fox to reach more students in more schools with the power of music,” said Jane Mell Balek, Give a Note Chief Executive Officer. “This is a wonderful opportunity to shine a spotlight on great music programs, which benefit students in all U.S. schools. These stories cannot be told enough, and the Foundation encourages communities to support their local school’s music programs and the teachers who make them possible.”

Since 2011, 21st Century Fox businesses have donated more than $1 million to underfunded music programs in schools across the country, as part of the company’s commitment to support the next generation of artists and creators.

“We were so inspired by the students who submitted nominations and the music educators who motivate them every day to work hard and achieve their dreams,” said Shira Oberlander, Executive Director of Social Impact for 21st Century Fox. “We are thrilled to support these teachers in their work to make a difference in students’ lives.”

Of the 20 winning music educators, these five have been selected to attend the 2016 NAfME National In-Service Conference (November 10-13) in Grapevine, TX, as VIP guests and will take part in a panel discussion on how to help students reach their full potential:

Give a Note Logo