New Luxembourg policies to pave the way for the future space-based business sector. 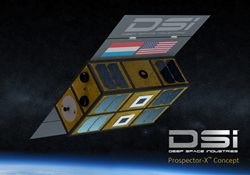 Prospector-X, the inaugural mission of the Luxembourg and Deep Space Industries partnership, Prospector-X, is a 3U spacecraft that will operate in low Earth orbit.

"Space should be like any other area of commerce, with clear guidelines, and the knowledge that commercial activities and investments will be protected."

Deep Space Industries (DSI) commends the government of Luxembourg and Étienne Schneider, Deputy Prime Minister and Minister of the Economy, for a new set of policies that create a framework to encourage commercial space activities. Luxembourg continues to remain at the forefront of the emerging commercial space sector through initiatives such as SpaceResources.lu and continued investment in local businesses.

"We applaud Luxembourg for taking this bold and visionary step to create the needed framework for private citizens and companies to operate in space," said Rick Tumlinson, Chairman of the Board at DSI.

Luxembourg is helping set the stage for a renaissance of space activities that will benefit its own citizens and the global community, and is now the second nation to step up to the challenge of enacting space resource and commerce policy. Deep Space Industries calls on other nations of the world to open the high frontier to their people through similar legislative action and international norms and agreements.

"This is exactly the sort of legal reality we need to begin doing business on the frontier," added Daniel Faber, CEO of DSI. "Space should be like any other area of commerce, with clear guidelines, and the knowledge that commercial activities and investments will be protected."

DSI was the first commercial company to partner with the government of Luxembourg’s SpaceResources.lu initiative, announcing plans in May 2016 to build and fly Prospector-X. This innovative program is an experimental mission to low-Earth orbit that will test key technologies needed for low-cost exploration spacecraft, and is scheduled to launch in 2017. Follow-on mission Prospector-1 will travel beyond Earth’s orbit to begin the first space mining exploration mission before the end of the decade.

About Deep Space Industries:
Deep Space Industries is an international space mining and satellite technology company, based in Luxembourg City, Luxembourg with offices in California and Florida, USA. The company is developing the technologies to find, harvest, and supply the asteroid resources that will transform the space economy. DSI also delivers robust technology products for the most demanding space applications. High-performance spacecraft components, developed in support of asteroid mining, provide robust and reliable solutions for Earth-based customers.