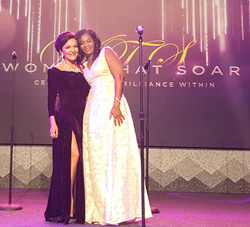 Each year the Women that Soar (WTS) Awards Ceremony honors a diverse group of global female leaders who have soared to success. This year Vaca was presented the Women That Soar Business Award by news anchor Palmira Pérez and Pinnacle Group’s President of Talent Solutions Freddy Vaca.

“Nina Vaca is a brilliant entrepreneur who works tirelessly to inspire other women to soar,” says Gina Grant, founder and CEO of Women That Soar. “In addition to establishing herself as the founder and owner of a successful business, Nina travels around the world as a Presidential Ambassador for Global Entrepreneurship inspiring women to pursue their own success through entrepreneurship and business. She also serves on the boards of three Fortune 1000 companies and actively mentors upcoming female leaders. With a personal goal to be ‘crazy good’, Nina exemplifies what it means to be a Woman Who is Soaring.”

“I am humbled to be honored by Women That Soar alongside such amazing woman that I respect and admire” said Vaca, “We have a debt of gratitude to Gina Grant founder of Women That Soar for her continued passion to celebrate the contributions woman are making around the world”

Nina Vaca is Pinnacle Group’s Founder, Chairman, and Chief Executive Officer. Her dynamic leadership over the past 20 years has propelled the company from a niche IT services firm to the workforce solutions powerhouse it is today. Vaca has won numerous awards both for Pinnacle and as an individual. She has been named one of the most influential Latinos in the United States for the past nine years and has been called one of the country’s 100 most intriguing entrepreneurs by Goldman Sachs. She was also named an Ernst & Young Entrepreneur of the Year and was inducted into its Hall of Fame. Recently she was honored with a lifetime achievement award by the Dallas Business Journal. For more information visit http://www.ninavaca.com

Pinnacle Group is a leading provider of information technology services and workforce solutions. Pinnacle Group includes Pinnacle Talent Solutions, its information technology staffing and professional services division; Pinnacle MSP, its managed services division; Pinnacle Payrolling, providing payrolling and independent contractor compliance services; and Pinnacle Canada, providing staffing, MSP, and payrolling services in Canada. Named the Fastest Growing Women-Owned/Led Company in the U.S. by the Women President’s Organization, Pinnacle Group has become one of the largest providers in its industry with thousands of IT professionals providing services across the U.S. and Canada. For more information visit: http://www.pinnacle1.com

For more information about the Women that Soar Awards and Women That Soar LLC visit: http://womenthatsoar.com