Distinguished group of athletes will be honored on February 21, 2017 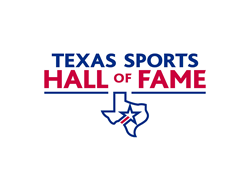 We are thrilled to induct such a distinguished class of hardworking, determined individuals into this year’s hall of fame. These athletes stand out not only for their accomplishments, but for their work ethic, tenacity and persistence.

“We are thrilled to induct such a distinguished class of hardworking, determined individuals into this year’s hall of fame,” said Jay Black, interim president and vice president of museum operations at the Texas Sports Hall of Fame. “These athletes stand out not only for their accomplishments, but for their work ethic, tenacity and persistence -- qualities we want to highlight for younger generations.”

Media information:
Interviews with the inductees will be conducted on at 10 am CST on November 17th via telephone conference. To participate, call (855)-756-7520 Ext.33856# and RSVP to Liz Hilton at ehilton(at)crosswindpr(dot)com. For breaking news regarding the TSHOF banquet honoring the class of 2017 follow us on twitter at @TXSportsHOF.

Accommodations:
The Hampton Inn North and the Fairfield Inn & Suites in Lacy Lakeview are the host hotels (located 5 minutes from the museum) for the induction banquet. Please mention the Texas Sports Hall of Fame for a discounted rate.

RITA BUCK-CROCKETT
San Antonio, TX native. Considered one of the best all-around volleyball players in history, Crockett played collegiately for the University of Houston. A 1977 AIAW All-American, selected to the 1980 and 1984 U.S. Olympic teams, Rita was a key member of the silver-winning ‘84 team -- still tied for the best indoor finish in U.S. Olympic history. Outside of the U.S. program, Rita played professional volleyball in Japan, Italy and Switzerland. Rita returned to the United States to play in the new Major League Volleyball league from 1986-87, earning the league’s MVP in 1987. In 1989, she teamed with Volleyball Hall of Famer Jackie Silva to win the World Beach Volleyball Championship to become the first African-American woman to earn the title. Rita’s indoor career continued in Italy with Matera and Rome from 1988 to 1993 -- earning the MVP of the Italian League in 1991. After her playing career ended in 1998, Rita continued to coach back in the U.S., serving as the head coach at Iowa from 1998 to 2004 before taking on the associate head volleyball coach role at Florida State in 2004 to 2005. Crockett is currently the volleyball Head Coach and Assistant Athletic Director at Florida International University.

DAVE ELMENDORF
A native of Houston, Texas, Dave Elmendorf was a star football running back and baseball player. He was a 1971 graduate of Texas A&M and was a 1970 All-American selection in football as a safety, kick returner and occasional tailback, and was a two-time All-American center fielder on the baseball team. Elmendorf was named All-Southwest Conference in 1969 and 1970.  He also was named Academic All-American and won a graduate scholarship from the National Football Foundation. In 1971, he was drafted to play baseball by the New York Yankees but chose to play football for the Los Angeles Rams. He was drafted in the 3rd round of the 1971 NFL Draft, earning all-rookie honors his first season. In his nine NFL seasons Elmendorf played in 130 games, starting all 130, intercepting 27 passes and recovering 10 fumbles. After the NFL he became a broadcaster on radio and TV and serves as the color commentator for the Texas A&M football radio broadcasts, as well as being involved in other business enterprises. In 1997 he was inducted into the College Football Hall of Fame and in 2016 into the Southwest Conference Hall of Fame.

PAT HENRY
An Albuquerque, NM native, Henry first made a mark in Texas when he started his collegiate coaching career at Blinn College in Brenham where he would win two NJCAA titles, leading to a career at LSU from 1988-2004. Henry moved to Texas A&M in 2005 where he led the Aggies to dominate the Big 12 winning 14 total conference titles. Since moving to the SEC, Henry has helped the men win one outdoor track title (2014) and one women’s outdoor title (2013). His biggest mark came as the first coach to lead a school to three consecutive NCAA men's and women’s track & field titles, which he did with Texas A&M from 2009-2011. Henry’s 35 team national titles are currently the third-most in any NCAA sport. He has the most indoor and outdoor track and field national team titles of any coach in history. He is the only NCAA head coach to ever win both the men’s and women’s outdoor national titles in the same year. During international duty, Henry served as head coach of the U.S. men's national team during the 2007 World Championships in Osaka, Japan. He led the U.S. men's team to a record 10 gold medals, bettering the previous best-of-nine set during World Championships in 1991 and 2005. In addition, the U.S. men's team totaled 19 medals, the best tally by the United States since the 1991 World Championships.

FLO HYMAN (deceased)
A Los Angeles, CA native, Hyman was the first female scholarship athlete at University of Houston, where she was a three-time volleyball All-American, leading the Cougars to two Top-5 national finishes. She skipped her final year to join the U.S. National Team in 1975. After failing to qualify for the ’76 Olympics and confronted with the boycott in 1980, Hyman led the U.S. to a silver medal in 1984. At 6-5, she was the tallest outside hitter in the women's game, and her 110-mph spike was a feared – and revered -- weapon. Hyman was consistently counted among the top players in the world before her death during a 1986 match in Japan, where she played professionally.

NASTIA LIUKIN
Moscow native Nastia Liukin grew up in Parker, TX. She would become the Olympic all-around gymnastic champion in 2008, and became only the third U.S. gymnast to win five medals at one Olympic Game: one gold for all-around; three silver medals – a team medal, and one each in the balance beam and uneven bars; and one bronze in the floor exercise. Nastia was also a nine-time World Championship medalist and a four-time U.S. national all-around champion; prior to the 2008 games she was a four-time world champion – in 2005 on the balance beam and uneven bars, and again in 2007 for the balance beam and with her gymnastic team.

ERIC METCALF
A native of Seattle, WA, Metcalf competed in both football and track and field in Arlington County, VA. He attended University of Texas-Austin where, as a football player, he was a three time All-SWC player, and in 1987 was named SWC Player of the Year and second team All-American. He won the NCAA National Long Jump title in 1986 and 1988 and SWC titles in long jump in 1986 and 1987, and was a five-time All American in track. Metcalf finished his NFL career with 2,392 rushing yards (12 TDs) and 541 receptions for 5,572 yards (31 TDs). He was most notable as a returner leading the NFL in punt return TDs in four different season – finishing with 3,453 punt return yards, 5,813 kick return yards and 12 total return TDs. Metcalf was a three-time All-Pro and three-time Pro Bowl selection (’93, ’94, ’97).

WADE PHILLIPS
An Orange, TX native, Phillips attended PNG High School before playing collegiate football at the University of Houston, where he was a three-year starter as a linebacker. The son of storied former NFL head coach Bum Phillips, Wade began his professional coaching career with the Houston Oilers under his dad. Since then, Phillips has held multiple NFL positions, including head coaching stints with the Denver Broncos, Buffalo Bills and Dallas Cowboys. Phillips added to his legacy by being named the 2015 NFL Assistant Coach of Year and orchestrating a phenomenal defensive performance in Super Bowl 50 that led to a Broncos victory. Phillips met his wife Laurie at PNG in 1964, where she was the head cheerleader and he was the starting QB.

DARREN WOODSON
A native of Phoenix, AZ, Woodson played football at Maryvale HS in AZ before attending Arizona State to play collegiate ball. Woodson was drafted in the second round of the 1992 NFL Draft by the Dallas Cowboys. He spent his entire career with Dallas (1992-2004), earning three Super Bowl titles (1992, 1993, 1995) and three first-team All-Pro selections (1994, 1995, 1996). Woodson finished his career with 813 tackles, 23 interceptions, 11 sacks, four forced fumbles and two touchdowns. In 2015, Woodson became just the eighth defensive player to join the Cowboys Ring of Honor. He is also a member of the Arizona State Hall of Fame (2005) and Arizona Sports Hall of Fame (2009).

About the Texas Sports Hall of Fame
The Texas Sports Hall of Fame and Museum, located in Waco, Texas, chronicles the heroes and legends of the Lone Star State sports at all levels, including high school standouts, Olympians and professionals. Established in 1993, the organization’s mission is to preserve the legacies of all inductees and the history of sports in Texas to educate and inspire guests of all ages. Home to over 300 Texas Legends, the museum houses Texas Tennis Museum and Hall of Fame and Texas High School Football Hall of Fame. For more information, please visit http://www.tshof.org/.