India, the world’s fastest growing economy, is also the worst country in the world for urban sanitation, WaterAid’s State of the World’s Toilets 2016 report reveals. 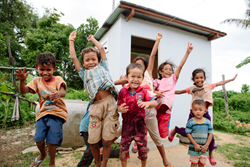 Children outside a WaterAid toilet in Pursat Province, Cambodia

Good sanitation is the bedrock of public health. Every town and city in the world needs to prioritize providing safe sanitation services to all the population in order to create a healthier, more sustainable future.

Despite the government’s campaign to make sanitation a priority, India’s towns and cities are growing at such breakneck speed that the number of urbanites living without sanitation is growing each year.

WaterAid’s second-annual report on the world’s toilets, ‘Overflowing Cities,’ examines the state of urban sanitation around the world, an issue that is becoming more pressing as two-thirds of the global population are expected to live in towns and cities by 2050.

India ranks top for having the greatest number of urbanites living without a safe, private toilet— 157 million—as well as the most urban dwellers practicing open defecation—41 million. The problem is so big that the daily waste produced on the streets of India’s towns and cities is enough to fill eight Olympic-sized swimming pools, or 16 jumbo jets, with poo, every day. As cities expand the numbers of urbanites living without basic sanitation has swelled by 26 million since the year 2000.

The report examines the problems facing more than 700 million urban dwellers around the world living without decent sanitation. An estimated 100 million of these have no choice but to defecate in the open—using roadsides, railway tracks and even plastic bags dubbed ‘flying toilets’.

The high population density of urban areas means that diseases spread fast in the absence of good sanitation.

“For millions of people, cities hold the promise of opportunity, innovation and ready convenience. But our cities boast an ugly secret, too: rapid growth, stretched infrastructure and overcrowded slums have left over 700 million people without access to a decent toilet. Beyond the humiliation and health risks this causes, the lack of sanitation in our cities threatens the health and security of all of us. The future is unfolding in towns and cities. That future must include access to sanitation and toilets for everyone.”

“WaterAid’s latest ‘State of World’s Toilets’ report has exposed several countries for failing to make progress in providing urban sanitation, despite their rapid economic growth. Often politicians prefer to invest in roads and other visible infrastructure and neglect the dirty issue of sanitation. But good sanitation is the bedrock of public health. Every town and city in the world needs to prioritise providing safe sanitation services to all the population in order to create a healthier, more sustainable future.”

This World Toilet Day, WaterAid is calling for:

WaterAid is the #1 ranked international non-profit dedicated to helping the people living in the world’s poorest communities gain access to safe water, toilets and hygiene. WaterAid has programs and influence in 37 countries across Africa, Asia, the Caribbean, Latin America and the Pacific region. Since 1981, WaterAid has reached 23 million people with safe water and, since 2004, 21 million people with toilets and sanitation.

For more information or to arrange interviews please contact: