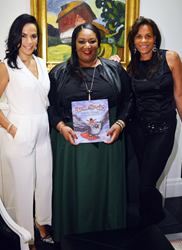 During the writing process I thought about how Rice & Rocks can serve as an educational resource for families seeking to teach children the importance of cultural diversity.

On Thursday, some of New York’s elite gathered together in New York City to celebrate the release of Rice & Rocks, a new children’s book written by Sandra L. Richards that connects cultures through cuisine.

During the book’s pre-order campaign and since its debut in August, Sandra pledged to donate one book for every five books sold to support programs that highlight the importance of children reading. To date, Sandra has donated 175 books across the country.

“Kim and I are such fans of Rice & Rocks,” Crystal said to the guests. “So it was our great privilege to host this book launch for Sandra, a fresh and exciting new voice in children's literature. Her book delivers a powerful message to our youth about inclusiveness and celebrates the commonalities that all cultures share while taking the readers on a magical and thrilling ride.”

“I started off writing a book in honor of my nephew, Giovanni, who passed away at the age of eight in 2007,” Sandra shared. “I wanted to have a way of remembering how fun and happy he was while with us. And during the writing process I thought about how Rice & Rocks can serve as an educational resources for families seeking to teach children the importance of cultural diversity. I wanted a book that was relatable and bought people together as we are this evening,” she said.

In the book, readers meet Giovanni before his friends come over and he finds out his grandmother is serving rice and beans, a traditional Jamaican side dish. Giovanni is embarrassed—he does not like rice and beans, calling them “rice and rocks” and worries his friends will think the dish is weird. So his favorite Auntie comes to the rescue. She and Giovanni’s pet parrot, Jasper, take him on a magical journey across the globe, visiting Japan, Puerto Rico and New Orleans, to learn about similar foods to his family’s Sunday meal each place offers.

Guests received a complimentary signed copy of Rice & Rocks, which is described as "A beautiful, amusing tribute to family traditions,” by the Kirkus Reviews. And currently has a five-star rating on Amazon.com.

Photos can be found here:
https://www.dropbox.com/sh/0rl2nrvoj9byfn4/AAAKZylskY1_BsWvRQAYe75va?dl=0