Okayama University have identified the gene mutation and the enzyme it encodes to determine whether the dormancy of barley is long (better for food crops) or short (better for beer-making). The findings are published in Nature Communications May 2016. 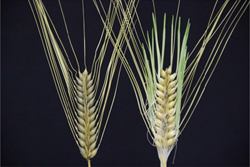 contributes further to the debate as to what extent the development of ancient agrarian societies was driven by the human appetite for flour and bread, or for beer and alcohol.

The authors of this paper note that, “The wild barley’s long dormancy means that, initially, the grain will not germinate in response to transient moisture availability and will therefore survive hot, dry summers”. As a result seeds like wild-type barley that undergo a long state of “dormancy” at maturity – during which they will not germinate –are favoured for food crops. In contrast a short dormancy is more efficient and preferable for beer making.

Kazuhiro Sato and colleagues – a collaboration of Okayama University and the Institute of Agrobiological Sciences in Japan and the University of Adelaide in Australia - compared DNA sequences of Haruna Nijo – a type of barley known to have short dormancy – with wild barley H602, known to have long dormancy. After studying over 5000 plants, they identified the section of the barley’s DNA that varies with expression of long or short dormancy - AK372829.

The gene AK372829 codes the enzyme alanine aminotransferase (AlaAT), which is known to play a pivotal role in nitrogen and carbon pathways and protein synthesis, and has been implicated in stress responses to low oxygen and nitrogen availability. Further experiments investigated variations in the nucleotide – that is, single nucleotide polymorphisms (SNPs) – as well as the structure and diversity of the protein associated with short dormancy.

Haruna Nijo has a dominant short dormancy allele Qsd1, whereas H602 has a recessive long dormancy allele qsd1. The results indicate that Haruna Nijo shares ancestry from long dormancy food-producing barley, suggesting “specific selection of reduced dormancy for the malting process”. As the researchers conclude in their report of the work, the selection and exploitation of the plants expressing the Qsd1 mutation for short dormancy “contributes further to the debate as to what extent the development of ancient agrarian societies was driven by the human appetite for flour and bread, or for beer and alcohol.”

Okayama University is one of the largest comprehensive universities in Japan with roots going back to the Medical Training Place sponsored by the Lord of Okayama and established in 1870. Now with 1,300 faculty and 14,000 students, the University offers courses in specialties ranging from medicine and pharmacy to humanities and physical sciences. Okayama University is located in the heart of Japan approximately 3 hours west of Tokyo by Shinkansen.