Referred to as an “oddball comedy” by film critic Cecil Trachenburg of GoodBadFlicks, the movie follows two brothers as they fight over a girl they plan to rob. 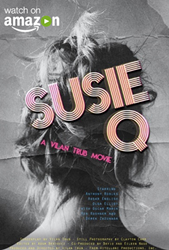 Director Vilan Trub’s freshman effort, “Susie Q” is now available exclusively on Amazon Prime Instant Video for streaming in the US and UK. The comedy/drama, set in Queens, NY, follows two immature brothers as they develop feelings for and subsequently fight over a neighborhood girl they’re planning to rob.

“The idea of two males plotting to rob a female is not exactly general audience material, but it’s exactly why I was driven to make this movie. To me, the deplorability of it all felt very Hitchcock in nature, right down to the blonde femme fatale. And when you have the two lazy and incompetent adolescents develop a crush on their target, it’s hard not to smile at the absurdity of it all,” said the film’s writer and director, Vilan Trub. “It’s an interesting story and I felt it would make for an interesting movie.”

Filmed on a shoestring budget over the course of several years, the movie made its premiere earlier this year at the New York City Independent Film Festival to a sold out audience. When the time came to settle on distribution for the movie, the goal was to utilize a platform that is most successfully reaching modern movie-viewing audiences.

Amazon Instant Video is transforming the media landscape and is a great home for cinema that is having an increasingly harder time competing with superhero movies at the box office. Video on demand services grant access to quality movies and television on a convenient platform, quickly gaining a reputation as the future of the industry.

About Vitelloni Productions, Inc.
Vitelloni Productions was launched by Vilan Trub in 2009 as a means to independently produce feature length films. Their next movie is a crime-drama tentatively titled The Dirty Kind, scheduled to start production on December 9th. The movie follows an ambitious private investigator specializing in divorce who accidentally uncovers a grisly crime, changing his outlook on the profession and life.