Declaring that “winning IDEA fundamentally changed everything,” an International Design Excellence Awards winner joins the IDEA 2017 jury, as the global design competition opens for entry from Dec. 1, 2016 to March 17, 2017. 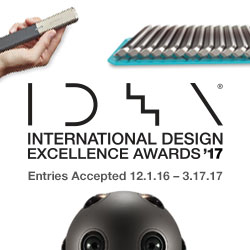 “Make us excited about what the world of design has to offer today. Give us that ‘Wow!’ we all crave.”

The Industrial Designers Society of America’s International Design Excellence Awards (IDSA IDEA®) 2017—honoring the best in industrial design and related fields—is open for entry at IDSA.org/IDEA from Dec. 1, 2016 to March 17, 2017.

IDEA 2017 Jury Chair Owen Foster, IDSA, is leading more than two dozen design experts from around the world in judging 20 categories covering products and more in almost every aspect of life from entertainment to environments; health to home; office to outdoor; social impact to sports. This year, there are two new IDEA categories: branding—recognizing identities, collateral and logo applications; and consumer technology—representing everything from smart phones and navigation systems to computers and mobile devices. Gold and Silver winners will be announced at the IDEA Ceremony and Gala on Aug. 19 in Atlanta, coinciding with IDSA’s International Design Conference 2017.

Foster, of SHiFT Design Camp and Aether Global Learning, has a diverse background in architecture, landscape, environmental and industrial design—facilitating projects with Fortune 500 companies such as Coca-Cola and General Electric. Honored as IDSA’s Educator of the Year in 2015, Foster has guided study programs in Ireland, United Kingdom, Hong Kong, Taiwan and China. "I'm honored to have been selected as the jury chair for IDEA 2017—celebrating design insight, talent and innovation. We’ve assembled an amazing group of individuals from an array of design fields to serve on this year's jury, so IDEA is at the forefront of redefining what design could and should be."

IDEA 2016 triple winner, The Access Strength, scored Gold, Best in Show and Design for Equality. “Winning IDEA fundamentally changed everything—everything,” declares Ryan Eder, IDSA—designer of The Access Strength along with Priority Designs and AWH. Eder first made headlines in IDEA 2007 when his design concept for The Access Strength won Gold, Best in Show and People’s Choice. “It’s hard to put into words how meaningful this recognition is for me,” says Eder, who is now an IDEA 2017 juror. “The initial recognition from IDEA enabled me to change my entire life and pursue this vision.”

Discounted early entry for IDEA 2017 runs through Jan. 2, 2017. Onsite jurying will be held at the iconic Henry Ford Museum in Dearborn, MI. Bronze winners will be announced in mid-May. For more information on sponsorships contact KatrinaK@idsa.org. Follow the excitement on #IDSAIDEA #IDSA17Atlanta @IDSA on Twitter; Industrial Designers Society of America on Facebook and LinkedIn; and @IDSAdesign on Instagram.

Founded in 1965, the nonprofit IDSA has thousands of members in dozens of Student Chapters, Professional Chapters and Special Interest Sections in the United States and internationally. The Society hosts events including an annual International Design Conference, five District Design Conferences, a Medical Design Conference and other niche conferences—bringing together some of the biggest names and brightest minds in industrial design and related fields. Global outreach includes designUpdate and designBytes e-newsletters; INNOVATION—IDSA’s flagship publication—a highly regarded magazine within the profession; and the Yearbook of Design Excellence, featuring IDEA, IDSA Award and Student Merit Award winners. IDSA Ambassadors support and promote industrial design with research and thought leadership such as INsights.