Give a Note Foundation, Radio Disney, and CMA Foundation join together again to present grants and celebrate school music programs. The 2017 Music In Our Schools Tour will visit six schools in six regions of the United States. 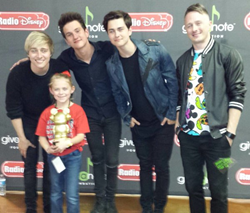 Watch and share these incredible videos and vote daily to select the six winners, which will be announced in January. Give a Note can’t wait to celebrate these schools with Radio Disney this spring.

Following a successful collaboration during the 2016 Music In Our Schools Tour, Give a Note Foundation, an affiliate of the National Association for Music Education (NAfME), and Radio Disney are gearing up once again to go on the road to shine a spotlight on school music programs around the nation.

Building on a growing collaboration between the CMA (Country Music Association) and Give a Note Foundations, the CMA Foundation has generously agreed to match the Music In Our Schools Tour grants and host the six teachers of the winning schools at the annual Music Teachers of Excellence program in Nashville. The inaugural Music Teachers of Excellence honors event was held in April and hosted by Country star Brett Eldredge, with 50 educators from Metro Nashville Public Schools receiving individual grants. Since 2006, CMA and the CMA Foundation have donated more than $17.5 million to support quality, sustainable music education programs across the country, touching the lives of 1 million students.

This fall schools submitted videos of their ensembles performing music that inspired them. The deadline was November 10 and the twelve semifinalist schools have been selected. Now, from the following schools, the public will decide which six schools will be part of the 2017 Music In Our Schools—Music Inspires Tour:

Music In Our Schools Month® or “MIOSM®” is NAfME’s annual celebration during March, which engages music educators, students, and communities around the nation in promoting the benefits of high quality music education programs in schools.

In 2016 Radio Disney artists like Carson Lueders and Ruth B and on-air personalities including Brooke, Candice, and Nate joined Give a Note CEO Jane Balek and other Foundation representatives in celebrating the music programs of the six winning schools by presenting a grant and hosting a celebration concert. Now, these twelve schools have a chance to be part of that exciting opportunity in 2017. Voting is eligible to one school in each region per day per IP address until midnight Pacific on December 9.

“These teachers and their students are so inspiring,” said Jane Mell Balek, Give a Note CEO. “Watch and share these incredible videos and vote daily to select the six winners, which will be announced in January. Give a Note can’t wait to celebrate these schools with Radio Disney this spring.”

To view the videos and vote for the six schools to be awarded a grant during the 2017 Music In Our Schools Tour, visit http://www.giveanote.org/2017-mios-semi-finalists/. The deadline to vote is midnight Pacific on December 9, 2016.

Since 2011, Give a Note Foundation has conducted national awareness campaigns and raised funds to support and strengthen music education programs across the U.S. The programs have reached millions of parents and students and provided more than $1 million in direct grants to schools. Learn more about Give a Note Foundation at http://www.giveanote.org. Help give the gift of music! Text “MusicEd GNF” to 20222 to donate $10! Message & Data Rates May Apply. Details: http://www.giveanote.org/giving/. You can follow Give a Note on Twitter http://www.twitter.com/giveanote, and on Facebook at http://www.facebook.com/giveanote.

Music In Our Schools Tour logo

Give a Note Foundation logo