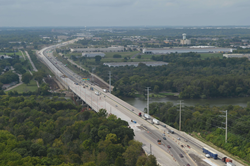 The replacement of the Fox River Bridge on the Jane Addams Memorial Tollway (I-90) in Elgin, Illinois, received an Honor Award from the American Council of Engineering Companies of Illinois in its annual Engineering Excellence Awards Competition. The annual competition recognizes engineering projects that demonstrate an exceptional degree of innovation, complexity, achievement, and value.

The $95 million bridge replacement project is one of the Illinois Tollway’s largest single contract awards in the $2.5 billion Jane Addams Memorial Tollway (I-90) Rebuilding and Widening Project between Rockford and O’Hare International Airport. The project was designed by Stanley Consultants, a global consulting engineering firm, with construction management provided by Chastain / Thomas JV and construction by Kenny/Kraemer JV.

Two unusual design and construction methods were used to remove the aging six-lane twin bridge and build a new eight-lane twin bridge in the same location, while simultaneously keeping six lanes of traffic open. The substructure of the new bridge – footings and piers – was constructed underneath the existing bridge while it remained in service. This unusual bridge-under-bridge design was possible because the beams used in the new bridge deck are much longer and deeper than the previous beams. During construction of the new bridge, a gantry system was used instead of a large crane to place the massive 2,000-pound deck beams. The gantry system alleviated the need to position a large crane close to the rare forested fen located adjacent to the bridge.

Using longer, deeper beams reduced the number of piers and expansion joints in the bridge, which lowers future maintenance costs and increases its lifespan. Combined with the use of stainless steel deck reinforcement, the new bridge is expected to have a service life of between 75 to 100 years.

Stanley Consultants provides program management, planning, engineering, environmental and construction services worldwide. Recognized for its commitment to client service and a passion to make a difference, Stanley Consultants brings global knowledge, experience and capabilities to serve clients in the energy, water, transportation and Federal markets. Since 1913, Stanley Consultants has successfully completed more than 25,000 engagements in all 50 states, U.S. territories, and in 110 countries. For more information on Stanley Consultants, please visit http://www.stanleyconsultants.com.