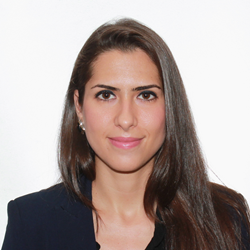 The one comment I repeatedly hear from clients is that they are glad Melissa is on their side and not their adversary's.

Creizman LLC is pleased to announce that the firm has promoted Melissa Madrigal to the position of Partner of the firm. Ms. Madrigal has practiced at Creizman LLC for three years and has taken a leading role in some of the firm's most high-profile white collar representations including:

"I would like to congratulate Melissa Madrigal on this very important professional achievement," said Eric Creizman, principal attorney and founding member of the firm. "Melissa exemplifies the core values of the firm - excellence, professionalism, and commitment to our clients. I am proud to have her represent the firm for many years to come."

Melissa Madrigal has earned professional recognition in New York for twice being elected by Super Lawyers as a Rising Star in the area of White Collar Criminal Defense, a recognition bestowed by her peers only to 2.5% of attorneys in each state.

"Melissa Madrigal is somewhat of a prodigy in this area, which is attributable in no small part to her being thrown into high-profile cases with substantial responsibility early in her career," Mr. Creizman said. Within two months of practicing law for highly-regarded Miami white collar defense lawyer Samuel Rabin, Ms. Madrigal prepared and second-chaired Mr. Rabin in a two-month complex health care fraud case. After moving to New York, Ms. Madrigal joined Creizman LLC, and "hit the ground running," according to Mr. Creizman.

Ms. Madrigal has established a reputation as a smart, no-nonsense, and fearless litigator, whose devotion to her clients is never in question. "The one comment I repeatedly hear from clients is that they are glad Melissa is on their side and not their adversary's," Mr. Creizman said.