The Y Celebrates 125 Years as the Birthplace of Basketball 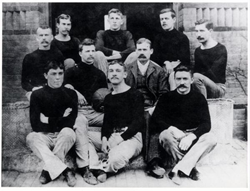 As basketball celebrates its 125th birthday, Dr. Naismith would be amazed at what his ‘simple’ game has become

In 1891, a YMCA program director named Luther Gulick asked James Naismith, a gym teacher at the YMCA Training School in Springfield, Mass., to invent a new indoor sport. Gulick wanted an activity to keep students fit and limber during the winter months. Naismith hung two peach baskets from the bottom of an elevated running track, posted a list of 13 simple rules, and basketball was born.

The YMCA students loved the game so much, they couldn’t wait for Christmas break and the opportunity to teach it to others in their hometowns. The game quickly gained popularity nationwide. The first official rules were published in January 1892, and the rest is hoop history.

“As basketball celebrates its 125th birthday, Dr. Naismith would be amazed at what his ‘simple’ game has become,” said Kevin Washington, President and CEO, YMCA of the USA. “Thanks to his imagination, what started with two peach baskets has evolved into one of the most popular games in the world. The Y is proud to be a part of basketball’s enduring legacy.”

Amos Alonzo Stagg, who is the only man ever inducted into both Football and Basketball Halls of Fame, played in the first basketball game ever organized by James Naismith. Additionally, Dr. Martin Luther King, Olympic track star Jesse Owens and baseball legend Jackie Robinson all honed their athletic skills and built friendships on YMCA basketball courts. Today that legacy lives on in Y's across the country offering basketball programs for kids and adults that not only deliver physical activity, but foster important life skills like teamwork and perseverance.

Other milestones in the early history of basketball include:

For more information about basketball or other Y programs visit ymca.net.
###

About the Y
The Y is one of the nation’s leading nonprofits strengthening communities through youth development, healthy living and social responsibility. Across the U.S., 2,700 Ys engage 22 million men, women and children – regardless of age, income or background – to nurture the potential of children and teens, improve the nation’s health and well-being, and provide opportunities to give back and support neighbors. Anchored in more than 10,000 communities, the Y has the long-standing relationships and physical presence not just to promise, but to deliver, lasting personal and social change. ymca.net