Canwood Gallery, a new addition in Herefordshire, is offering art lovers the chance to see some of the world’s most famous modern pieces for free, including works by Carl Andre, Angela Conner, Walenty Pytel and Heather Jansch, as it launches this week. 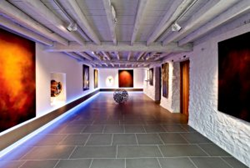 Canwood Gallery is the realization of a life-long dream for Herefordshire farmer Stephen Dale, who took on the venture after developing non-Hodgkin’s Leukaemia in his thirties.

A new gallery in Herefordshire is offering art lovers the chance to see some of the world’s most famous modern pieces for free, including works by Carl Andre, Angela Conner, Walenty Pytel and Heather Jansch, as it launches this week.

Carl Andre’s Isoclast 07 (or “the bricks”) will be on show inside the barns at Canwood Gallery alongside work by local Herefordshire artists, while the sculpture park displays further pieces inside the gallery’s 10 acres.

Canwood Gallery is a non-for-profit gallery set up with the goal of exhibiting thought-provoking art within the beautiful and inspiring countryside of Herefordshire. All profits from the gallery will be donated to Barts Charity, after the gallery’s founder survived a ground-breaking trial treatment for non- Hodgkin’s Leukaemia at St Bartholomew's Hospital in the 1970s.

Rare photographs taken by the one of the world’s greatest comedy actors, Peter Sellers, will also be going on sale in the new art gallery to help raise money for the British Heart Foundation’s [BHF] Nation of Lifesavers campaign.

The personal collection, provided by the Sellers family and Vogue Magazine, includes intimate images of 1960s and 1970s celebrities away from the gaze of public view, from Liza Minnelli and Leigh Taylor- Young to HRH Princess Margaret. Some of the images are for sale and all proceeds will go towards the BHF campaign which aims to train the nation in how to perform life-saving CPR when someone suffers a cardiac arrest.

Lucy Graham, Head of Philanthropy at the British Heart Foundation, said: “We are incredibly grateful to Stephen and the Sellers family for their generosity, and choosing to support our Nation of Lifesavers campaign.
“As the nation’s heart charity we are determined to improve survival rates from cardiac arrest by training everyone to be a potential life saver. The money raised from the sale of this incredible artwork will help us ensure more people are trained in CPR.”

Canwood Gallery is the realization of a life-long dream for Herefordshire farmer Stephen Dale, who took on the venture after developing non-Hodgkin’s Leukaemia in his thirties. While undergoing a clinical trial in the 1970s for a new treatment at St Bart’s Hospital, Stephen visited the TATE art gallery where he saw the “pile of bricks” Equivalent VIII sculpture by artist Carl Andre.

After being the only person to survive his clinical trial, Stephen decided to open his own gallery to provide Herefordshire residents with free access to contemporary art, with Isoclast 07 Graphite bricks by Carl Andre being the centerpiece.

Stephen Dale, owner and founder of Canwood Gallery, said: “I was six stone when I visited the Tate and thought that would be my last outing from St Bart’s. Whether art was the reason I survived, or not, I cannot say but I do know that the “bricks” made an impression that stayed with me for the rest of the trial and for the next 40 years of farming. Art should invoke an emotion and I hope that by bringing contemporary art and sculpture to the rural surrounds of Herefordshire that at least one person will be inspired in the same way I was inspired.”

Simon Pitts, Community Manager at Barts Charity, said: “Stephen’s story is truly inspirational and we’re hugely grateful to him for choosing Barts Charity and supporting research into cancer immunopathology at St Bartholomew’s Hospital. It is fantastic that Stephen has chosen to help future patients and also to fulfil his dream of opening the gallery. We wish him and everyone connected with Canwood all the success this amazing project deserves.”

The Canwood Gallery & Sculpture Park launches during H.ART week in Herefordshire and is then open to the public for free from September 19th 2016. For more information visit http://www.canwoodgallery.com

Canwood Gallery
Canwood Gallery is a non-for-profit gallery set up with the goal of exhibiting thought provoking art within the beautiful and inspiring countryside of Herefordshire. Our profits will be donated to Bart’s Charity.
In the 1970s the gallery owner, then a farmer, became critically ill with leukaemia, and was sent down to Bart’s hospital in London to take part in a medical trial as a last ditch attempt to try and save his life. In between some pretty severe treatments, including radiation and mustard gas among many others, he decided to venture out and took a black cab and asked where he could go to see something different. The driver took him to the Tate and refused to take any fee. Upon walking into the Tate the first thing he saw and found great inspiration in was the controversial Carl Andre bricks. It was the first of many visits. Whether it was the inspiration from art or the treatment, or both, he was the only person in his batch of 12 to survive to this day.

It has always been Dale’s desire to give something back and to build a gallery in Herefordshire where people could experience interesting art for free.

About British Heart Foundation
For over 50 years we’ve pioneered research that’s transformed the lives of people living with heart and circulatory conditions. Our work has been central to the discoveries of vital treatments that are changing the fight against heart disease. But so many people still need our help. From babies born with life- threatening heart problems to the many Mums, Dads and Grandparents who survive a heart attack and endure the daily battles of heart failure. Join our fight for every heartbeat in the UK. Every pound raised, minute of your time and donation to our shops will help make a difference to people’s lives. For more information visit bhf.org.uk.

This is an art festival in Herefordshire that runs from the 10th to the 18th September. For more information visit http://www.h-art.org.uk