Vector Marketing, the sales and marketing arm of Cutco Cutlery, has inducted 11 individuals into its Hall of Fame. The Hall of Fame is the company’s crowning achievement. 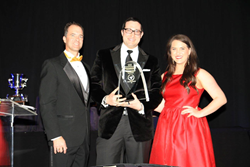 “Those rare individuals who receive this honor are among the most talented people in the entire direct-selling industry."

Vector Marketing recently inducted 11 team members into its Hall of Fame for reaching outstanding personal or company sales goals. Vector Marketing is the sales and marketing arm of Cutco Cutlery, makers of the world’s finest knives. Since 1987, some 260 individuals have reached Hall of Fame status — a crowning achievement in the direct marketing company.

“There is no greater achievement in our company than being inducted into the Vector Hall of Fame,” said Bruce Goodman, president of Vector Marketing Corporation. “Those rare individuals who receive this honor are among the most talented people in the entire direct-selling industry."

Nine Vector sales representatives were recently inducted into the Hall of Fame, for selling more than $1 million of Cutco Cutlery in their careers. They are Ari Aberman, Johnson Coley, Thomas Facinoli, Luke Mills, Daniel Perez, Joseph Rodriguez, Patton Sides, Gonzalo Trevino and Miles Tucker. Gonzalo Trevino is also the first person in Cutco’s 65-year history to sell $1 million worth of Cutco products in a single year.

Eric Ward, of Houston, Texas, was inducted into the Hall of Fame as a district manager, for reaching more than $10 million in career sales. He oversees the Northwest Houston-Cyprus District. Dane Espegard of Minneapolis, Minnesota, reached the Hall of Fame for surpassing $20 million in career sales as a division manager. He oversees the Vector North Star Division.

“It feels pretty amazing to hit the Hall of Fame,” said Eric Ward, who started as a Cutco sales representative in 2002. “The feeling is only rivaled by seeing the countless young leaders under our tutelage go on to become wildly successful as a direct result of their Vector Marketing experience.”

Recipients were honored at regional banquets this January that recognize both annual and lifetime achievements. The Hall of Fame inductees received a specially designed ring with three large center diamonds and eight supporting diamonds, and a walnut and Lucite award commemorating their achievements. They also earned a certificate redeemable for a trip to the destination of their choice, valued at $5,000. Their portraits will be permanently displayed on the Cutco-Vector Hall of Fame Wall.

Vector Marketing is the marketing and sales arm of Cutco Cutlery, a 65-year-old company with headquarters and manufacturing facilities in Olean, New York. Vector sells Cutco products through a national team of sales representatives primarily consisting of motivated college students who are trained to do in-home and virtual demonstrations on a pre-set basis. Vector Marketing has over 200 locations nationwide and works with students of all majors with any levels of professional experience.