Music Duo, Meanz of Operation, Gets Major Streams, Without a Major Label

Duo, Meanz of Operation is featured on Billboard, after charting on Spotify's Viral 50 USA for highest music streams 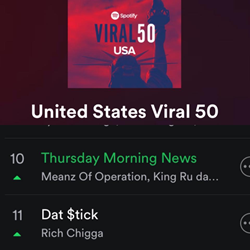 "Wait, check your phone. Are you seeing the same thing I'm seeing? Over 33,000 music streams in one day! IS THIS FOR REAL!"... That's how AceVane greeted fellow Meanz of Operation member, Randolph, this past Saturday morning. Their song, "Thursday Morning News," produced by King Ru da 3rd, from their recently released, The Obvious Secret LP, was exploding in Spotify music streams. For seasoned artists such as Drake, Kanye West, and Jay Z, that amount of music streams might be more typical of only one hour, not one day. However, for the self made independent duo still in the middle of their success story, this could be the markings of a game changer.

“Thursday Morning News” hits #9 at it's highest, with hopes of still rising on the USA Top 50 Viral songs charts with Spotify, featured on Billboard. This song has been streaming with the underground crowd for weeks, and with music downloads increasing, it seems that the rest of the US is finally catching up after the release of the song's official video.

"We approached the song as if we were scoring a Spike Lee Joint. Back when you could visualize hip-hop because it told a story. We are all about bridging the cultural gap of Hip Hop for all lovers of the music.”

Jacksonville, Florida, natives, Meanz of Operation (M.O.), has set a goal to revitalize the dynamics of Hip Hop groups from the South. They first began to get notoriety after Hip Hop artist The Game free styled on the song “Coming Soon” and alluding to M.O. being the next group coming to the hip hop world via social media sites. Soon after they received praised from T-Pain and Record Executive Kawan “KP” Prather as an innovative Hip Hop group with hard beats and clever lyrics to step on the scene.

Meanz of Operation can be found on all major streaming services including; Spotify, Apple Music, Tidal, Soundcloud, YouTube, and more.