On December 10, seven recipients of Cosmic Sister’s psychedelic feminism grants will travel to the Amazon rainforest in Peru to participate in traditional ayahuasca ceremonies, where they are legal. 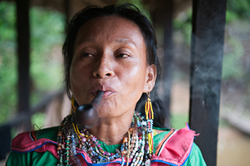 Natural psychedelics such as ayahuasca are evolutionary allies. We’re interested in responsible psychedelic journeying from a women’s empowerment perspective.

On December 10, seven recipients of Cosmic Sister’s psychedelic feminism grants will travel to the Amazon rainforest in Peru to participate in traditional ayahuasca ceremonies with trained indigenous shamans in a safe setting. The diverse grant recipients include a medical doctor, a psychedelic scholar, a musician, a journalist, an interpreter, a yoga educator and a photographer.

Ayahuasca is a powerful plant-based psychedelic brew from the Amazon that is legal in Peru, where it is considered a cultural treasure. Zoe Helene, founder of Cosmic Sister and an experienced ayahuasca journeyer, advocates for responsible journeying with natural psychedelics as a means of conscious evolution. “One of Cosmic Sister’s goals is to support women to develop quality immersive journalism about the ayahuasca experience after participating personally in authentic ayahuasca ceremonies where they are legal,” said Helene. “Natural psychedelics such as ayahuasca are evolutionary allies. We’re interested in responsible psychedelic journeying from a women’s empowerment perspective.”

Cosmic Sister brings women’s voices to the forefront in the field of psychedelics through a series of interconnected, merit-based psychedelic feminism grants. The Plant Spirit Grant financially supports passionate, communicative, creative women to participate in authentic, legal ayahuasca ceremonies in the Peruvian Amazon. A companion grant, Women of the Psychedelic Renaissance, supports women to share their experience upon returning home. All seven women have received Women of the Psychedelic Renaissance educational grants, and five have been awarded Plant Spirit Grants, which cover the costs of staying at the retreats.

“Up to this point the primary spokespeople in the psychedelic arena have been men, despite the fact that women participate equally in these endeavors,” Helene said.

Helene’s husband and partner, ethonobotanist and medicine hunter Chris Kilham—also a highly experienced ayahuasca journeyer—will accompany the women as a guide and help introduce them to the region’s medicinal plants. “While psychedelics hold promise and offer benefits to men and women alike, women find resolution for issues specific to gender while also tapping into deep wells of creativity,” Kilham said. “Psychedelic feminism is a path, a way of empowerment and integration.”

“Ayahuasca is a loving medicine and a sacred plant,” Helene said. “Psychedelic plants can liberate us from whatever burdens we carry, reconnect us with our core selves and our path of heart and inspire us to help others do the same. It’s an honor to journey with these outstanding women.”

Los Angeles-based journalist Katie Bain (33), born and raised in Wisconsin, writes about electronic music, culture and travel (her passions) for Billboard, L.A. Weekly, The Rattling Wall, Beatport News and more. “The intersection of music and psychedelics has become the sweet spot in my professional coverage because it’s one of the places where all these things meet,” she said. “While in Peru, my intention is to use the space to explore new artistic and creative realms and work with whatever other scenarios present themselves.” Bain was also awarded a Women of the Psychedelic Renaissance journalism grant to develop an immersive travel article about her experience. (@bainofyrexstnce)

New York City-based musician and writer Faye Sakellaridis (28) is managing editor of The Alchemists Kitchen and Reality Sandwich, where she enjoys the “rich spectrum of intellectual essays on consciousness through a diverse lens of art, culture, and science.” She earned an MFA in Creative Writing from Queens College, but as a classically trained improvisational pianist, she identifies first and foremost as a musician. “Writing and music are two are elemental parts of me, and communicating through them is what I do,” she said. Sakellaridis was also awarded a Women of the Psychedelic Renaissance grant to explore and write about her personal healing work around creative and emotional blockages to transform “healing into art.” (@fayesakell)

Tacoma, Washington-based psychedelic scholar and teacher Nese Devenot, PhD (29) is an Andrew W. Mellon Postdoctoral Fellow in Digital Humanities at the University of Puget Sound. One of her key interests is “going outside the purely therapeutic program” to allow everyone—not just people who have suffered trauma or psychological issues—to see their lives from a different perspective. Through ayahuasca, she intends to explore themes related to “Chemical Poetics,” a book she’s writing about the relationship between language and psychedelic experiences. Devenot was also awarded a Women of the Psychedelic Renaissance grant to explore and write about her research focus from a personal perspective. She hopes her work “contributes to broadening our cultural appreciation for non-ordinary states of consciousness to cultivate a more empathic and compassionate world.” (@NeseLSD)

Freeport, Maine-based family physician Selma Holden, M.D. (40), recently finished Harvard Medical School’s Integrative Medicine post-doctoral research fellowship. She believes “more in skills than pills” for helping people heal, and weaves mindfulness, yoga, herbs and other complementary techniques into her clinical repertoire. A mother, she’s particularly interested in maternal wellness. Through ayahuasca, she said, she is looking for “connection with truth, re-engagement with energy and motivation, and a clearer vision to do what’s needed for the world—doing the best I can with the privileges I’ve been given.” Holden was also awarded a Women of the Psychedelic Renaissance grant to write about her ayahuasca experiences for peers and colleagues in the integrated medical field and beyond.

Asheville, North Carolina-based Sandra García (50), a Colombian-American Spanish translator, interpreter and visual artist, plans to interview native Shipibo women in the Amazon about gender equity, shamanism and their experiences as women in modern tribal culture. García’s life’s work is about “sharing the vision of oneness and the connection between all beings.” Garcia, who recently became a U.S. citizen, was also awarded a Women of the Psychedelic Renaissance grant to interpret for an article Helene is developing about how ayahuasca’s growing popularity affects female shamans and women of the indigenous Shipibo tribe and the connection between la medicina and their exotic kinetic textile art. Garcia will also support other writers on assignment.

Boulder, Colorado-based yoga teacher and cannabis educator Rachael Carlevale (29), the first recipient of the Plant Spirit Grant in 2013, will return to Peru on a Women of the Psychedelic Renaissance grant to explore her work fusing yoga, healing and cannabis with a special focus on women’s reproductive systems. Carlevale will also examine the implications of “coming out” to her family about her cannabis liberation work following her cannabis wedding this summer. (@ganjasana)

This will be Western Massachusetts-based photographer Tracey Eller’s (52) third Women of the Psychedelic Renaissance grant to photograph grant recipients on location and the ayahuasca scene in the Peruvian Amazon. Eller’s high-resolution images will be available free for reputable media outlets that cover Cosmic Sister or grant recipients (media(at)cosmicsister.com). Eller received a Plant Spirit Grant in 2014. (@ellerimages)

Cosmic Sister’s founder, Zoe Helene, an artist and cultural activist, is passionate about promoting and connecting kindred-spirit trailblazers in mutually supportive ways. Through Cosmic Sister advocacy projects, she helps communicate messages of love, liberty and ethical evolution. Zoe is a devoted wildlife advocate and psychedelic feminist. Her women’s empowerment work embraces psychedelic allies from the natural word—such as ayahuasca, cannabis and peyote—as a way for women look more deeply inside themselves, in part to discover fresh, liberating perspectives on core feminist issues. Her work has been featured in Bust, Forbes, Boston Magazine, Utne Reader, AlterNet and more, and her writing has been published in LA Yoga, Boston Yoga, Utne Reader, Organic Spa Magazine, Organic Authority, Eco Salon, Endangered Species Coalition, Huffington Post and others. She has a Master of Fine Arts in Theatre. (@CosmicSister)

Chris Kilham is a medicine hunter, author, and educator who promotes natural, plant-based medicines, sustainable global trade and indigenous cultures. Chris has conducted medicinal plant research in over 40 countries and lectures on holistic wellness and botanical medicines around the world. He has appeared on over 500 TV programs in U.S. and international markets, addressing traditional botanical medicines, psychoactive and psychedelic plants. Chris has been featured in The New York Times, Outside magazine, Psychology Today, LA Weekly, and Newsweek and appeared on CNN, NBC Nightly News, Good Morning America, ABC 20/20, Nightline and many other top tier media venues. He is the author of 15 books, including The Ayahuasca Test Pilots Handbook, Psyche Delicacies, and The Five Tibetans, which has been published in over 28 languages. (MedicineHunter.com)

Cosmic Sister (@CosmicSister) is a network that connects kindred-spirit trailblazers in mutually supportive ways, working collectively toward shared goals while enhancing each individual’s personal journey. Cosmic Sister wants to see a healthy, life-affirming balance of power between genders worldwide. The Plant Spirit Grant is funded internally. Cosmic Sister does NOT promote illegal activities. Donations for Women of the Psychedelic Renaissance educational grants are fully tax-deductible through Cosmic Sister’s fiscal sponsor, the Multidisciplinary Association for Psychedelic Studies (MAPS). A direct link to the donation form can be found at http://www.cosmicsister.com/support. For more information, visit cosmicsister.com, or contact founder Zoe Helene at media(at)cosmicsister.com or (617) 501-6165. Join us on facebook.com/cosmicsister and twitter (@cosmicsister).

Founded in 1986, the Multidisciplinary Association for Psychedelic Studies (MAPS) is a 501(c)(3) nonprofit research and educational organization that develops medical, legal, and cultural contexts for people to benefit from the careful uses of psychedelics and marijuana. For more information, please contact Brad Burge, director of communications and marketing, brad(at)maps.org.

Ayahuasca boiling down the brew in the Amazon jungle. Photo by Tracey Eller / Cosmic SisterAyahuasca is a powerful, combinatory plant-based psychedelic brew from the Amazon that is legal in Peru, where it is considered a cultural treasure.