Desmond and Penny of ABC's 'LOST' reunite onscreen in 'Visible'. 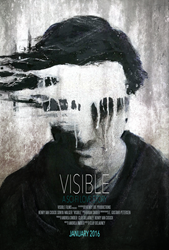 If no one could see you who would you be?

‘Visible’ is a Sci-Fi love story, starring Henry Ian Cusick ('The 100') and Sonya Walger ('The Catch'), of ABC’s 'LOST' fame. This marks the first time the two have been onscreen together since they played the star crossed lovers, Desmond Hume and Penelope “Penny” Widmore, on the show which last aired in 2010. 'LOST' fans are extremely excited to see their beloved Desmond and Penny onscreen, once again, and the chemistry is still palpable between the two. 'Visible' is a high-concept film short that will engage the audience and leave them wanting more.

‘Visible’ Summary:
The year is 2086. Seventy years ago the entire human race went invisible. Ten years ago, a small number of people began to mysteriously reappear. While theories exist, no one knows what's truly going on. When Guy, a conflicted artist, is presented with the knowledge that he has the potential to transform back to a visible state, he's faced with a tough dilemma: does he become visible and accept a life of vulnerability and possible judgment, or does he stay invisible and risk losing an existence of passion, honesty, and love?