Turning relationships into daily wins is at the heart of Winly. The common thread in our signature Inside Game, Outside Game and 12 Playbooks is the benefit of maximizing and leveraging individual and business relationships through strategic planning. 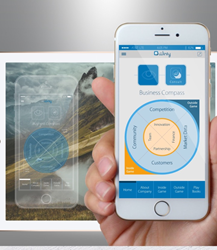 Winly is your perfect Business Compass

“Our playbooks are inspired by the millions of entrepreneurs who are looking to win big with limited resources. The Winly app wires your mind with growth strategies that are easy to understand and execute, “ says founder and CEO Nicole Valentine Esq

Business apps are becoming increasingly popular with entrepreneurs, making visionaries faster and better at being productive and efficient. While having a top notch team is a huge part of their success, using cutting edge apps has also become the norm in strengthening a company’s Inside and Outside Game. The faster these leaders can access information and execute, the quicker they can grow their businesses.

Winly, a screen apart from the average business app, has released version 1.5 of its application. Teaching entrepreneurs everywhere to download their ideas in an organized way, the new version of this app helps steer businesses toward profitability while guiding them toward exponential growth using 12 “Playbooks.” These Playbooks include a Brand Playbook, Innovation Playbook, Advisory Playbook, Investor Playbook, Philanthropy Playbook and more.

New features on the business planning tool include:

This ultimate strategy app for CEO's has been winning since 2014. Winly's groundbreaking platform was created to:

Over 5000 entrepreneurs later in over 22 countries, Winly is making winners out of everyone who uses their strategy system.

Influencing the best of the best in the entrepreneurship world, Winly’s product suite also attracts CEO’s, Executives, and other strategic leaders in the business world. Download the Winly App today on iTunes and stay informed @winlyapp on Twitter and @winly_app on Instagram.

About Winly
Winly is a Business Strategy App for Entrepreneurs & Business Owners. Focused on keeping entrepreneurs and business owners in the Growth Game, Winly offers a framework to stay current on key business data and exclusive playbooks that enables accelerated growth. Available on the Apple App Store and free to download at http://www.winlyapp.com

About Nicole Valentine
For over 10 years, Valentine was a key player on Wall Street practicing international M&A and securities and as the assistant general counsel and vice president executing acquisitions in emerging markets. Today, Valentine is an entrepreneur and advises CEOs and Innovation Leads at Fortune 500 companies, small businesses, start-ups, and non-profits through game-changing deals using the Synergy Method created by her management consultancy, Synergy Business Development, Inc. Valentine is founder of Winly business strategy and growth App on the iTunes Apple Store. She has shared plays on media properties such as Bloomberg Law and BusinessWeek, American Express OPEN Forum, Huffington Post, ARISE TV and My Beautiful Life, American Express OPEN for Women CEO Bootcamp, Harlem Business Alliance Summit, The Downtown Project and the ThoughtWorks Tech Entrepreneur Series.