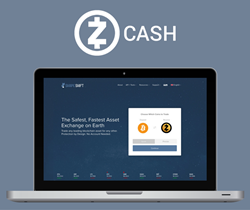 Zcash is now available for exchange on ShapeShift

Zcash finally fulfills an early promise of Bitcoin technology - the ability to transact freely and privately with anyone in the world.

ShapeShift.io has integrated the decentralized, consumer privacy-focused digital asset, Zcash (ZEC), onto its blockchain exchange platform. Customers anywhere in the world can now buy or sell Zcash instantly along with Bitcoin, Ethereum, Dash and dozens of other digital assets. As an innovative exchange, ShapeShift is known for keeping users safe, avoiding the need to expose sensitive private information.

The Zcash (ZEC) asset offers consumer privacy and, for the first time, selective transparency of transactions. Zcash’s groundbreaking cryptography has the ability to hide the sender, recipient, and value of all transactions on the blockchain, offering total payment confidentiality. The Zcash protocol makes blockchains useful for a whole range of applications that the clear-text, fully transparent blockchains cannot be used for; including fintech, healthcare and retail.

“Zcash finally fulfills an early promise of Bitcoin technology - the ability to transact freely and privately with anyone in the world,” said ShapeShift Founder and CEO Erik Voorhees. “This protects the right to privacy held by all individuals on Earth, and opens up new commercial use cases which were impossible without truly confidential transactions.”

The technical breakthrough of ZEC is a type of zero-knowledge proof called a zk-SNARK. zk-SNARKs allow the blockchain network to maintain a secure ledger of balances without disclosing the parties or amounts involved in transactions. Instead of publicly listing spend-authority and transaction values, the transaction metadata is encrypted and zk-SNARKs are used to prove that users are spending value they actually possess.

“Zcash is a group of scientists and techies who came up with a way to combine blockchains with data security. These two things are well understood, important, and widely used, but have never been put together before now,” said Zcash CEO Zooko Wilcox. “The launch of the Zash protocol is the first of its kind. It is the accumulation of years of academic research, hard engineering work, and diligent security work.”

The ZEC genesis block has been mined today, October 28, 2016. A Linux-based daemon and command-line tool is available through the Zcash core development team for users wishing to purchase ZEC. Both community-hosted and pre-established wallets will be available and can be found here.

ShapeShift is a crucial piece of infrastructure in the world of Bitcoin. From start to finish, users can exchange blockchain tokens in seconds, with no account required. No emails or passwords. No lengthy sign­up process. No accounts. No bid and ask orders. No friction. ShapeShift's goal is the fastest, safest, and most convenient way to swap digital assets. See more at: https://shapeshift.io

The Zcash Company is a science-driven team; a combination of academic expertise in computer science and cryptography with security software engineering talent. Zcash Company is developing the next generation of secure digital currency and blockchain technology through the use of zero-knowledge proofs, to guarantee privacy and confidentiality. We aim to set a new standard for privacy. To learn more, visit https://z.cash/.