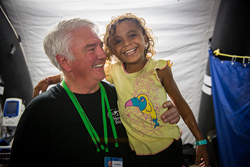 Mercy Ships has become a beacon of light in some of the darkest parts of the world, and it represents the very best of America — compassion, service and love for our neighbors," said Congressman Louie Gohmert

“Over 38 years ago, Don Stephens had a vision to take healthcare to places in the world filled with poverty and suffering,” Gohmert said. “Today, he is president and founder of Mercy Ships, with international headquarters right in east Texas. Having spent time on a Mercy Ship in West Africa, I can verify the incredible blessings this group brings: the lame walk, the thousands blind from massive cataracts ultimately see, people with massive tumors get a new lease on life and children with no hope of a normal life get that chance. Mercy Ships has become a beacon of light in some of the darkest parts of the world, and it represents the very best of America — compassion, service and love for our neighbors. There are few who could merit this medal more than Don Stephens.”

Each year, Mercy Ships has more than 1,600 volunteers worldwide, including surgeons, dentists, nurses, healthcare trainers, teachers, cooks, seamen, engineers and agriculturalists, who donate their time and skills to the effort. The organization has a strong focus on training local healthcare workers.

Don Stephens was impacted by human suffering he witnessed from a hurricane in 1964. The birth of his profoundly disabled son, John Paul, and a brief encounter with Mother Teresa inspired him to start Mercy Ships. Mother Teresa left him with three penetrating questions: “Why were you born?” “Where is your pain?” “What are you doing about your dream/purpose?” His answers and a personal walk of faith led him to look for suitable ships to convert to a hospital for the poorest. Stephens and his team raised $1 million to purchase the first Mercy Ship, the Anastasis. It set sail in 1982 with Don, his wife, Deyon, and their four children who lived onboard for the next 10 years.

Don Stephens’ vision became a reality that to date has provided more than 82,000 life-changing surgeries in 55 developing countries, in addition to training more than 5,900 local professionals, who have gone on to train others in their communities – leaving a lasting educational impact. Stephens gives a daily podcast, “Mercy Minute,” in which he shares stories to encourage listeners to help those in need.

“I am honored to receive this nomination on behalf of the countless volunteer professional crew members who have served in Mercy Ships since 1978,” Stephens said. “Mercy Ships was founded because we truly care about making a lasting impact on the people we serve across the world. I greatly appreciate the opportunity to share more about the work we do, which is helping to solve the urgent global surgery crisis.”

“Nearly 40 years ago, Don Stephens acted on his vision and dedicated his life to creating a true state-of-the-art hospital ship. With a volunteer crew, Mercy Ships has been successful in delivering tangible hope and healing to thousands of forgotten poor,” said Myron E. “Mike” Ullman III, chairman of the board, Mercy Ships. “Don’s legacy has a worldwide impact, and we are thrilled to see it recognized.”

The Africa Mercy is docked in the port city of Cotonou, Benin, until June 2017. The volunteer crew plans to provide more than 1,700 surgeries to patients and treat more than 8,000 people at a land-based dental clinic, in addition to providing training to local medical professionals. Mercy Ships expects delivery of a new purpose-built hospital ship in 2018 that will serve alongside Africa Mercy, more than doubling the number of people served.

ABOUT MERCY SHIPS
Mercy Ships uses hospital ships to deliver free, world-class healthcare services, capacity building and sustainable development to those with little access in the developing world. Founded in 1978 by Don and Deyon Stephens, Mercy Ships has worked in more than 55 developing nations, providing services valued at more than $1.3 billion and treating more than 2.56 million direct beneficiaries. The Africa Mercy is crewed by 400 volunteers from up to 40 nations. Professionals who include surgeons, dentists, nurses, healthcare trainers, teachers, cooks, seamen, engineers and agriculturalists donate their time and skills to the effort. With offices in 16 nations, Mercy Ships follows the 2,000-year-old model of Jesus in bringing hope and healing to the world’s poorest. For more information, visit http://www.mercyships.org.

ABOUT THE CONGRESSIONAL GOLD MEDAL
Since the American Revolution, Congress has commissioned gold medals as its highest expression of national appreciation for distinguished achievements and contributions. For more information, click on: http://history.house.gov/Institution/Gold-Medal/Gold-Medal-Recipients/.