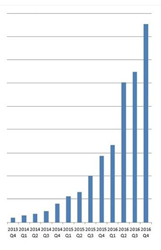 KnowBe4, America’s most popular integrated security awareness training and phishing platform announced its explosive year over year sales increase of 298% for Q4 2016, with a record number of over 750 new corporate accounts in December alone with a very robust 88% customer retention rate rising to over 8,000 enterprise accounts. Fueling this growth is the accelerating demand for its integrated training and phishing platform. KnowBe4 has seen consecutive growth for a record 15 straight quarters, and more recently a stellar 2300% growth rate from 2013 to 2016.

Skyrocketing rates of ransomware infections and the proliferation of scams such as the Business Email Compromise (BEC) -- also known as CEO fraud -- have brought the problem of social engineering to the forefront, costing billions of dollars in losses. In June 2016, the FBI issued an updated alert reporting a 1,300% rise in losses due to CEO fraud since January 2015 to the tune of 3.1 billion dollars.

“KnowBe4’s new-school security awareness training and simulated phishing platform has been well received by IT managers because it finally allows them to manage the ongoing problem of social engineering and train their employees to make better security decisions,” said KnowBe4 CEO Stu Sjouwerman. “Customers continually tell us that their employee security culture is much better. Staff feels safer knowing they can better control both their organization’s and personal security,” added Sjouwerman.

According to a fresh IBM study published December 2016, ransomware infections have exploded. An astounding 70% of those hit with the combination of a ransomware infection and failed backup are paying to get their data back. More than half these paid ransoms were over $10,000. According to SANS, financial firms are hit even harder with the average loss between $100,000 to $500,000.

KnowBe4’s own study in mid-2016 showed IT Managers felt security awareness training was considered to be the most effective tool against ransomware at 88 percent, followed by backup at 83 percent. Confidence in email and spam filtering effectiveness was only 72 percent.

“Ninety-three percent of all phishing email contains ransomware,” noted Sjouwerman. “Between ransomware and CEO fraud, cyber criminals have built themselves a very successful business model that is pumping hundreds of millions of dollars into their pockets. These internet bad guys are located primarily in Eastern Europe and are out of the reach of U.S. law enforcement agencies, leaving both companies and nonprofits to fend for themselves.”

According to Sjouwerman, “CEOs, C-level executives and managers in Finance and HR are increasingly becoming targets for cyber criminals. They need help along with employees to recognize the evolving techniques used by cybercriminals. KnowBe4 recommends frequent simulated phishing attacks to keep employees aware and on their toes.”

About KnowBe4
KnowBe4, the provider of the world’s most popular integrated new school security awareness training and simulated phishing platform, is used by more than 8,000 organizations worldwide. Founded by data and IT security expert Stu Sjouwerman, KnowBe4 helps organizations address the human element of security by raising awareness of ransomware, CEO Fraud and other social engineering tactics through a new-school approach to security awareness training. Kevin Mitnick, internationally recognized computer security expert and KnowBe4’s Chief Hacking Officer, helped design KnowBe4’s trainings based on his well-documented social engineering tactics. Thousands of organizations trust KnowBe4 to mobilize their end-users as a first line of corporate IT defense.