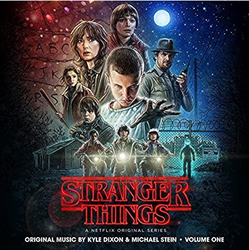 “Getting nominated for two GRAMMY® awards is an amazing peak on our ‘Stranger Things’ journey,” said Dixon and Stein. “The directors were previously fans of our synth band S U R V I V E. So to be a part of such a pop culture phenom is insane."

“Getting nominated for two GRAMMY® awards is an amazing peak on our ‘Stranger Things’ journey,” said Dixon. “The directors were previously fans of S U R V I V E. They used a song from our first LP in a trailer they made to pitch their concept to Netflix. Once the show was picked up, they reached out to see if we were available to score the show.” Stein added, “We wanted a classic synth tone and feel to the music for the show, while offering a refreshing quality so it felt modern. Now we’re nominated for two GRAMMY awards which is insane.”

“It's a great honor for Kyle Dixon and Michael Stein to be recognized for their work, which embodied the imagination and wonderful story telling of the Duffer Brothers,” said Brian McNelis, SVP, Music & Soundtracks. “Lakeshore Records is grateful to The Recording Academy and the Film/TV music community for its two GRAMMY® nominations for Best Score Soundtrack for Visual Media for Netflix’s hit show ‘Stranger Things.’ These nominations reward TV and filmmakers for making the kinds of creative choices that we believe are important to the art form. There is no question that the show’s soundtrack helped it become a cultural phenomenon.”

Formed in 2009, the prolific Austin, TX experimental synth quartet S U R V I V E has released two full-lengths and numerous EPs /singles since its inception, including recent contributions to the soundtrack for the acclaimed indie horror film “The Guest.” Additionally, two of the group’s members recently scored the soundtrack for the first season of Netflix’s breakout hit “Stranger Things” and received two GRAMMY Award nominations for “Best Score Soundtrack for Visual Media. S U R V I V E has appeared at esteemed festivals across the US including Moogfest, Levitation Fest, Fun Fun Fun, Beserktown, Day in The Desert, Decibel, etc. and has played alongside acts such as Goblin, John Maus, Tame Impala, Lightning Bolt, This Will Destroy You, A Place To Bury Strangers, Max Cooper, and many others; Noisey called their live show “transcendental.”