More WiFi calling, more phone, more fun, and always affordable: Republic Wireless to offer the feature packed Moto G4 PLAY in its growing line of affordable Android smartphones. Republic’s WiFi first calling plans which start for as little as $15 a month use both WiFi and cellular networks to offer plans that are 40%-60% less expensive than comparable plans from the big carriers. 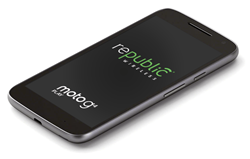 The Moto G, 4th generation is back at WiFi Calling innovator Republic Wireless. At $149, it's feature packed and better than ever.

If you’re looking for an affordable smartphone with solid battery life to help you answer emails, call, text, and snap photos throughout your day, the Moto G4 PLAY is next to unbeatable in its feature set and price range.

“WiFi is all around us, and ‘WiFi first’, a trend we pioneered, is here to stay. Between Republic Wireless’ rapidly expanding Android smartphone lineup and the ability to Bring Your Own Phone* to our network, we make it easy for consumers to pair the best Android smartphone for their budget with our award-winning, crazy affordable WiFi first service,” Chris Chuang, chief executive officer, Republic Wireless.

“It’s super exciting to see the rich feature set of today’s mass market phones,” Chuang adds. “If you’re looking for an affordable smartphone with solid battery life to help you answer emails, call, text, and snap photos throughout your day, the Moto G4 PLAY is next to unbeatable in its feature set and price range.”

The Moto G4 PLAY packs a lot of higher-end features into a highly affordable phone.

Republic’s Adaptive Coverage™ blends WiFi with cellular to create expanded network coverage for consumers that is less expensive to operate. The Clear Choice Plans pass these savings on to customers in the form of being 40%-60% less expensive than comparable plans from the big carriers.

*For a list of supported Android smartphones – Android M and above – please see Bring Your Own Phone at http://www.RepublicWireless.com.

About Republic Wireless
Recognized for excellence in customer service by PC Magazine and as the top pre-paid carrier choice by Consumer Reports, Republic Wireless is on a mission to provide remarkably simple and affordable ways to stay in touch with anyone, anywhere, in any way. Headquartered in Raleigh, North Carolina, Republic Wireless leverages the power of both WiFi and cellular networks and gives consumers the ultimate flexibility to manage costs. The service uses WiFi in the home, office or anywhere else as the primary network for calls, texts and data. When outside of WiFi coverage, the smartphone works just like a typical smartphone on the cellular networks of national carriers. Visit http://www.republicwireless.com/ for more information. Media resource center here.

WiFi calling goes mainstream in 2017. By using two networks instead of one, innovators like Republic Wireless make it easy to save on your cell phone bill.

With "WiFi first" plans starting for as little as $15 a month, Republic Wireless continues to raise the bar and usher in a new era in consumer smartphone service.