Juntendo University researchers identify areas of the brain responsible for metacognitive memory evaluation in macaque monkeys. The findings are reported in the journal Science, January 2017. 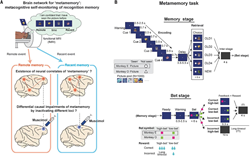 We know how confidently we know: The findings reveal that parallel metamemory streams supervise recognition networks for remote and recent memory, without contributing to recognition itself.

Juntendo University researchers identify areas of the brain responsible for metacognitive memory evaluation in macaque monkeys. The findings are reported in the journal Science, January 2017.

“We know how confidently we know,” explains Yasushi Miyashita and colleagues at Juntendo University Graduate School of Medicine and the University of Tokyo School of Medicine in their recent report. The evaluation of how well we remember things requires a metacognitive self-monitoring of memory-states termed “metamemory.” Now Miyashita and co-authors have identified which parts of the brain are essential for these “metamemory” processes for the first time using macaque monkeys.

The self-reflective mental processes of metamemory require a high level of cognition, once thought to be unique to humans. However over the past ten years metacognitive assessment of perception have been reported in non-linguistic animals, and researchers have developed experimental frameworks for investigating its brain mechanisms in animals. However, so far little is known of metamemory, because it requires the reconstruction of past experiences as current mental representations for metacognitive assessment, the process of which naturally requires more self-reflective and introspective information processing than perceptual metacognition. Amongst the other unanswered questions, it is unknown whether the processes that implement metamemory were distinct from the processes of memory itself.

Miyashita and colleagues showed macaque monkeys a series of four pictures of objects. Afterwards, the monkeys were shown an additional picture, and asked to indicate, not just whether they had seen the additional picture before but to wager how confident they were in their response. Functional MRI mapping of the whole brain during these tests indicated distinct areas that were activated during the metamemory processes.

The brain images also revealed that the area responsible for metamemory of the last picture – recent memory - was different from that for the first picture –remote memory. Reversible deactivation of these areas noticeably impinged on the monkeys’ metamemory functions without affecting their ability to memorize the pictures.

The researchers concluded, “The findings reveal that parallel metamemory streams supervise recognition networks for remote and recent memory, without contributing to recognition itself.”

Some have suggested that metacognition is a survival process that should be common across creatures but it is little understood so far. In particular understanding metacognitive processes in non-linguistic animals and children can provide insights into how much independence there is between thought and language.

Previous studies had investigated the neuronal activity during metacognitive perception in macaque monkeys and rats. These works looked at brain activity during the self-monitoring of real-time decisions. Since metamemory requires the reconstruction of past experiences it can be considered a more self-reflective metacognitive process. So far metamnemonic processes have only been observed in macaque monkeys, apes and dolphins, as well as humans, highlighting comparative cognitive capabilities among these species.

The researchers found that when the macaque monkeys were engaged in metacognitive judgement of memories of the first picture seen – that is, an old remote memory – the brain was activated in the dorsal prefrontal cortex, around the posterior supraprincipal dimple (aPSPD), particularly within area 9 (or area 9/46). However when wagering on a memory of the last picture seen – a recent memory – the anterior part of the supplementary eye field (SEFa) within area 6 activated instead.

The contribution of the supplementary eye field to perceptual metacognition has been previously suggested. However as the researchers point out in their report, this is the first observation of metacognitive roles for area 9, especially at aPSPD.

Mission Statement
The mission of Juntendo University is to strive for advances in society through education, research, and healthcare, guided by the motto “Jin – I exist as you exist” and the principle of “Fudan Zenshin - Continuously Moving Forward”. The spirit of “Jin”, which is the ideal of all those who gather at Juntendo University, entails being kind and considerate of others. The principle of “Fudan Zenshin” conveys the belief of the founders that education and research activities will only flourish in an environment of free competition. Our academic environment enables us to educate outstanding students to become healthcare professionals patients can believe in, scientists capable of innovative discoveries and inventions, and global citizens ready to serve society.

About Juntendo
Juntendo was originally founded in 1838 as a Dutch School of Medicine at a time when Western medical education was not yet embedded as a normal part of Japanese society. With the creation of Juntendo, the founders hoped to create a place where people could come together with the shared goal of helping society through the powers of medical education and practices. Their aspirations led to the establishment of Juntendo Hospital, the first private hospital in Japan. Through the years the institution’s experience and perspective as an institution of higher education and a place of clinical practice has enabled Juntendo University to play an integral role in the shaping of Japanese medical education and practices. Along the way the focus of the institution has also expanded, now consisting of four undergraduate programs and three graduate programs, the university specializes in the fields of health and sports science and nursing health care and sciences, as well as medicine. Today, Juntendo University continues to pursue innovative approaches to international level education and research with the goal of applying the results to society.