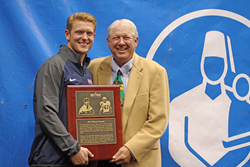 “Weston epitomizes everything this award is about,” said Shrine Game executive director, Harold Richardson. “Through his service in the Air Force, he has demonstrated commitment, sacrifice, and dedication to our country."

Each year, the East-West Shrine Game presents the Pat Tillman Award to recognize the player who best exemplifies intelligence, sportsmanship, and service. The award celebrates a student athlete’s achievements and conduct on and off the football field. The 2017 recipient is Air Force safety, Weston Steelhammer.

A native of Shreveport, La., Steelhammer was named first-team All-Mountain West, second-team AP All-America, a finalist for the Lott IMPACT Trophy, and a semi-finalist for the Jim Thorpe Award. He led the Falcons in tackles for the second straight year with 75 and has 4.5 tackles for loss, and a sack. He led the Mountain West and ranked fifth in the nation with six interceptions. He has 17 for his career which ties the Academy record and he led the FBS.

“Weston has the courage, sense of sacrifice and care for others to be an Air Force Officer,” said Air Force head coach, Troy Calhoun.

Steelhammer started his Shrine Game experience with a visit to Shriners Hospitals for Children-Tampa where he played with patients on the basketball court, pushing them on swings, taking photos and signing autographs. He spent the week practicing with his teammates under defensive backs coach of the Indianapolis Colts, Greg Williams, and West head coach George Edwards, defensive coordinator of the Minnesota Vikings.

“Such an incredible and humbling experience it’s been,” said Steelhammer. “After our visit to the Shriners Hospital, we hope that we can impact their lives as much as they impact ours.”

“Weston epitomizes everything this award is about,” said Shrine Game executive director, Harold Richardson. “Through his service in the Air Force, he has demonstrated commitment, sacrifice, and dedication to our country. On and off the field, he has exhibited his outstanding character.”

About the East-West Shrine Game
The East-West Shrine Game is the longest-running college all-star football game in the country and features some of the highest-rated players in the projected NFL draft ranking. While the teams are divided by East and West, the players come together for the beneficiary of the event, Shriners Hospitals for Children. For more information, visit http://www.shrinegame.com.