Study also reveals that social, mobile and email will drive the spending surge. 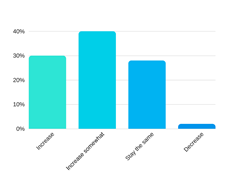 Digital marketing is vital for SMBs and our survey numbers bear that out. Marketers are investing accordingly, given the substantial return on investment delivered through web-based campaigns. - Simon Grabowski, GetResponse CEO and Founder

GetResponse, the easy-to-use yet advanced online marketing platform with more than 350,000 customers in 182 countries, announced the results of a commissioned study examining expected digital marketing investments among US-based small and medium-sized businesses in 2017. The study, fielded between November 28th and December 1st, 2016, also identified the channels most likely to drive spending. 200 US-based SMB decision-makers were polled for the study.

When asked if their digital/web-based marketing budgets in the New Year would “increase,” “decrease,” or “stay the same,” 70% said they would “increase.” Of that group, 30% said that the budget will “increase considerably,” while 40% say it will “increase somewhat.” Of the remaining 30% polled, 28% said that their budget would remain unchanged, while only 2% said their digital marketing budgets would “decrease” in 2017.

“Digital marketing is vital for SMBs and our survey numbers bear that out,” said Simon Grabowski, GetResponse CEO & Founder. “Marketers are investing accordingly, given the substantial return on investment delivered through web-based campaigns.”

Social, mobile and email are poised to drive growth

Among the SMB executives surveyed that projected increased marketing budgets in 2017, when asked what areas will primarily drive that growth: 59% said “marketing on social networks,” such as Facebook, LinkedIn and Twitter. Rounding out the top-three were “mobile marketing” (50%)—either app or web-based—followed by “email marketing” (42%).

“Mobile marketing is increasingly important given the surging content consumption numbers across smartphones and tablets,” said Grabowski. “And social media usage has only grown in tandem with mobile consumption, as the most popular platforms are mobile-first. Email, too, has become a mobile-driven activity. Ultimately, mobile is the reason why these areas will drive spend in the New Year.”

With social media, mobile marketing and email owning the top-three growth areas, the remaining channels were “video production” (28%), “search marketing, including paid search” and “content creation and management” (both at 26%), “data collection and analytics” and “corporate website maintenance and development” (both at 23%), and, finally, “commerce experiences” (16%).