The Best Business Intelligence Platforms Software According to G2 Crowd Winter 2017 Rankings, Based on User Reviews 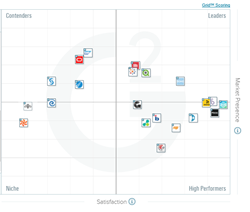 ●The report is based on more than 1,031 reviews written by business professionals.

●Of the 53 products listed in G2 Crowd’s Business Intelligence Platforms category, the ranked products each received ten or more reviews to qualify for inclusion on the Grid.