Russ DiGilio, founder and owner of Duck Donuts Franchising Company, has announced that Pennsylvania's fourth Duck Donuts will be located in Pittsburgh. 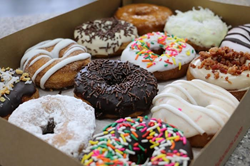 Duck Donuts Franchising Company announces its expansion to Pittsburgh, Pennsylvania. It will be the fourth Duck Donuts to open in owner Russ DiGilio's home state.

Our team is thrilled to expand Duck Donuts across our home state of Pennsylvania. The city of Pittsburgh is a magnet for families, young professionals, and college students.

Russ DiGilio, founder and owner of Duck Donuts Franchising Company LLC, has announced the expansion of his donut franchise to Pittsburgh, Pennsylvania—the first in Allegheny County and the fourth to open in his home state of Pennsylvania.

Franchise owners Andrew and Kate Jarusinsky, Pittsburgh natives, will open the first Steel City Duck Donuts in spring 2017 at the new Siena at St. Clair retail center, 100 Siena Drive. The location is adjacent to Whole Foods and near the South Hills Village Mall.

“We were first introduced to Duck Donuts in 2011 while vacationing in the Outer Banks. My family agreed they were the best donuts we had ever tasted, and we continued to visit for years to come,” says Andrew Jarusinsky. “In 2015, I learned of franchising opportunities and decided to make a career change.”

Pittsburgh—Pennsylvania’s second-largest city—is home to over 65 colleges and universities including Carnegie Mellon University, the University of Pittsburgh, and Duquesne University. In 2016, Pittsburgh was ranked as one of the Most Fun Cities in America by WalletHub, a Favorite U.S. Cities by Travel + Leisure, and one of the Most Affordable Places to Live by US News.

“Our team is thrilled to expand Duck Donuts across our home state of Pennsylvania. The city of Pittsburgh is a magnet for families, young professionals, and college students,” says DiGilio. “This sports hub is home to the Pittsburgh Steelers, Pirates, and Penguins and their legions of fans. We look forward to our warm, delicious, made-to-order donuts becoming another fan favorite among locals and visitors.”

The Jarusinskys plan to open multiple Duck Donuts locations in western Pennsylvania over the next few years. As of January 26, 2017, Duck Donuts Franchising Company has 33 open locations and 136 signed contracts.

“Each new Duck Donuts brings 25-40 new jobs to the community it serves. Through growing the local economy and our #QuackGivesBack initiatives, we’re excited to immerse ourselves in this friendly, vibrant city,” says DiGilio.

When it opens, the Pittsburgh store will join the already-open Lancaster and Mechanicsburg stores, as well as Hershey (slated for March).

The new 1,500 square foot location will include a retail store, as well as indoor and outdoor seating. Donuts will be made fresh to order 7 days a week from 6:00 a.m. to 7:00 p.m. For Grand Opening details, specials, and donut topping updates, visit the Duck Donuts Pittsburgh Facebook page or connect on the web at DuckDonuts.com.

Duck Donuts was founded in 2006 by Russ DiGilio in Duck, North Carolina. His intention? To solve a family vacation problem: “Our family wanted a place to buy warm, delicious & made to order!™ donuts, and when we couldn’t find one, we decided to start our own.”

By 2011, Duck Donuts had expanded to four Outer Banks locations and the donut business was so successful that DiGilio was continuously approached about franchise opportunities and by fans who begged for a Duck Donuts in their communities. The first franchise opened in Williamsburg, VA, in 2013, and there are now 33 open franchise locations and 136 signed contracts.

Duck Donuts emphasizes the importance of giving back to the local community through their #QuackGivesBack initiatives every month. “Our mission is twofold,” says DiGilio, “to serve the most amazing warm, delicious, and made-to-order donuts, and to contribute to the communities we call home.”

The Duck Donuts Experience
“We discovered that the most powerful marketing advantage we have is the aroma of warm donuts wafting from every store. Our light vanilla cake donut is a little crispy on the outside and fluffy on the inside, made fresh right in front of you, hand-dipped in hot icing, and sprinkled with your choice of delicious toppings and drizzles. It’s that simple,” says DiGilio.

Children (and grownups) love to stand on the strategically placed step in the waiting area, allowing them to see the entire process as the donut machine cooks and carries their donuts down the line, where they are dipped, topped, packaged, and served warm in the box. Duck Donuts serves its own signature coffee blends—Riptide Roast, Light House Blend, and Sunset Pier Decaf with new special seasonal flavors changing throughout the year—and offers breakfast options, as well as catering services. Indoor and outdoor seating is available at most locations.