Got Cars? Get Roads! Toy Roads for Toy Cars at Great Walmart Prices --100% Made in the USA 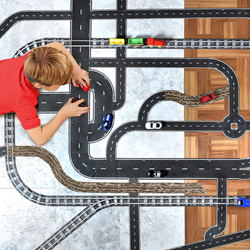 InRoad Toys is excited to announce that its award-winning PlayTape® product line is now available in more than 3,100 Walmart stores across the USA.

A 2016 Toy of the Year Finalist, PlayTape makes it easy for kids to create instant roads for toy vehicle play anytime, anywhere. PlayTape sticks to any flat surface, and is easy to tear and reposition. After hours or even days of fun, it peels up without any residue and is recyclable, so cleanup is a snap. Parents can take PlayTape anywhere – in a pocket or purse – and bring their children’s imaginations to life!

PlayTape is open-ended play at its best. So much more than a roll of tape, PlayTape is a whole new world of play just waiting to be unrolled. With PlayTape, kids can create roads across the room or up the wall, racing drag strips down the hall, towns, cities and more – anything they can imagine for their favorite cars and trucks. PlayTape makes toy car play twice as much fun – because it’s fun to build with and fun to drive on.

Now PlayTape is easy to buy at Walmart:

To celebrate its Walmart debut, InRoad Toys is launching a fun “Picture Yourself with PlayTape” promotion in every Walmart store where PlayTape is sold. Parents and kids can take selfies with PlayTape at Walmart and get a complementary pack of PlayTape Curves direct from InRoad Toys. Details can be found at http://www.InRoadToys.com/Walmart. A map of Walmart stores that carry PlayTape can be found at http://www.inRoadToys.com/locator/walmart.

“Toy cars are in over 80% of U.S. homes, but toy roads are mostly imaginary,” said InRoad Toys Founder and CEO, Andy Musliner. “With PlayTape at Walmart, it’s easier and more affordable than ever for millions of kids across the country to bring their imaginations to life -- building the driving and racing worlds of their dreams. And since PlayTape is 100% Made in the USA and recyclable, it’s safe for your kids, your home, and the environment, and it creates American jobs.”

Walmart discovered PlayTape through its first “Made in the USA” Open Call event, part of the company’s $250 billion commitment to source unique new American-made products that support American jobs. Now, thanks to Walmart and its customers, InRoad Toys and PlayTape are opening up a whole new world of creative play for kids everywhere, while proudly supporting nearly 100 manufacturing jobs in 15 states.

Parents can see PlayTape in action on YouTube, and buy genuine, Made-in-the-USA PlayTape at Walmart to bring kids’ imaginations to life.

InRoad Toys develops groundbreaking, enduring, high-play value toys with broad applicability across age groups. The company’s premier product, PlayTape® is revolutionizing the way the world plays with toy vehicles. With award-winning PlayTape, kids can instantly create roads and rails for toy vehicle play anytime, anywhere. Just unroll, stick, and drive! It’s hours of entertainment on a single roll. PlayTape sticks to any flat surface and is easy to tear by hand and reposition. It peels up without any residue and is recyclable, so cleaning up is a snap. Take PlayTape anywhere – in your pocket or purse – and let your child turn imagination into reality. Since peeling out into the market in 2014, PlayTape has won over 25 industry awards, including Parents Magazine Best Toys of 2014 and 2016 Toy Industry Association Toy of the Year Finalist. PlayTape is 100% Made in the USA. Ages 3+. U.S. Patent and Patent Pending. For more information visit http://www.InRoadToys.com, http://www.Facebook.com/InRoadToys.

Take a Selfie with PlayTape and get FREE Curves. www.inroadtoys.com/Walmart

Look for PlayTape at your local Walmart store- near Hot Wheels