Trident has earned the 2017 Military Friendly® School designation by Victory Media. This is the sixth time the University has been recognized. 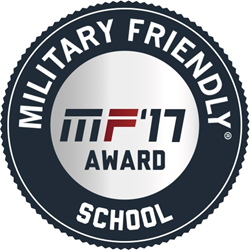 Each year, the list of Military Friendly® Schools is provided to service members and their families, helping them select the best college, university, or trade school to receive the education and training needed to pursue a civilian career. This is the sixth time that Trident has received this designation.

Institutions earning the Military Friendly® School designation were evaluated using both public data sources and responses from Victory Media’s proprietary survey. More than 1,700 schools participated in the 2017 survey; 1,273 were awarded with the designation. Ratings methodology, criteria, and weightings were determined by Victory Media with input from the Military Friendly® Advisory Council of independent leaders in the higher education and military recruitment community.

Final ratings were determined by combining the institution’s survey scores with the assessment of the institution’s ability to meet thresholds for Student Retention, Graduation, Loan Repayment, Persistence (Degree Advancement or Transfer) and Loan Default rates for all students and, specifically, for student veterans.

“Being recognized on the Military Friendly® Schools for the sixth time highlights Trident’s continuous commitment to our nation’s service members. They have spent their time in uniform serving us, now it is our turn to serve them and help them to achieve their academic goals,” said Esmeralda Silva, Vice President, Outreach & Strategic Alliances.

According to Daniel Nichols, a Navy Reserve veteran and Chief Product Officer at Victory Media, “Our ability to apply a clear, consistent standard to the majority of colleges gives veterans a comprehensive view of which schools are striving to provide the best opportunities and conditions for our nation’s student veterans. Military Friendly® helps military families make the best use of the Post-9/11 GI Bill and other federal benefits while allowing us to further our goal of assisting them in finding success in their chosen career fields.”

About Military Friendly® Schools:
The Military Friendly® Schools list is created each year based on extensive research using public data sources for more than 8,800 schools nationwide, input from student veterans, and responses to the proprietary, data-driven Military Friendly® Schools survey from participating institutions. The survey questions, methodology, criteria and weightings were developed by Victory Media with the assistance of an independent research firm and an advisory council of educators and employers. Data calculations and tabulations were independently evaluated for completeness and accuracy by EY. The survey is administered for free and is open to all post-secondary schools that wish to participate.