For the second year in a row, the Multiple Myeloma Research Foundation, Takeda and CURE Media Group will support the team of patients, family members, doctors and other participants as they trek Africa’s tallest mountain 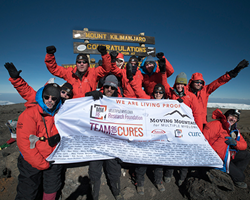 On February 17, a 16-person team of patients with multiple myeloma and supporters will set off on their attempt to summit the famed Uhuru Peak on Mount Kilimanjaro in Tanzania, Africa. The group is taking on this challenge to drive fundraising and awareness for critical myeloma research as part of the Moving Mountains for Multiple Myeloma program, a collaboration between the Multiple Myeloma Research Foundation (MMRF), CURE Media Group and Takeda.

All proceeds from this climb, which will be the Moving Mountains for Multiple Myeloma initiative’s fourth event and second trek of Mount Kilimanjaro, will benefit the MMRF’s efforts to accelerate the development of multiple myeloma treatments. To date, Moving Mountains for Multiple Myeloma participants have raised more than $794,698 through the three completed hikes — Mount Kilimanjaro in January 2016, the Grand Canyon’s Bright Angel Trail in May 2016 and Machu Picchu’s Inca Trail in August 2016 — and ongoing fundraising efforts in support of the upcoming Kilimanjaro and other 2017 climbs.

“The MMRF is honored to continue to collaborate with CURE® and Takeda in this effort, and we are inspired by the nearly $800,000 that has been raised thus far, which will fuel our precision medicine model to ensure that every patient receives precision-based treatment and care. We are especially proud that the 2017 Mt. Kilimanjaro trek will include six myeloma patients – validating the extraordinary progress the MMRF and our partners have driven over the last decade to extend and improve the lives of patients,” said Paul Giusti, CEO, MMRF.

CURE Media Group president, Michael J. Hennessy Jr., added, “We are pleased to announce that we are continuing to team up with MMRF and Takeda to raise awareness for multiple myeloma. This inspirational climb shows that multiple myeloma is not insurmountable and that this climb builds a global awareness.”

At 19,341 feet (5,895 meters), Mount Kilimanjaro is the world’s highest free-standing peak. The Moving Mountains for Multiple Myeloma team will ascend through multiple climate zones, from rainforest to alpine desert, and face challenges such as extreme altitude, high winds and below-freezing temperatures. Over eight days, they will gain 11,599 feet in elevation and cover up to 43 miles on foot.

"At Takeda Oncology, our greatest aspiration is to cure cancer. Programs like Moving Mountains for Multiple Myeloma drive funding for research, and this research may serve as the foundation for someday achieving this aspiration,” said Shawn Goodman, Head of Global Oncology Corporate Communications, Takeda. “Partnering with the MMRF and Cure in this Moving Mountains global initiative, we have a unique opportunity to make this journey alongside patients with multiple myeloma — six of whom are part of this year’s team — to help increase awareness, raise money for research and bring us one step closer to a cure.”

To learn more about Moving Mountains for Multiple Myeloma and to donate to multiple myeloma research, please visit http://www.movingmountainsformultiplemyeloma.com.

About Multiple Myeloma
Multiple myeloma is a cancer of the plasma cells, which are found in the bone marrow. In multiple myeloma, a group of plasma cells, or myeloma cells, becomes cancerous and multiplies, increasing the number of plasma cells to a higher than normal level. Because plasma cells circulate widely in the body, they have the potential to affect many bones in the body, possibly resulting in compression fractures, lytic bone lesions and related pain. Multiple myeloma can cause a number of serious health problems affecting the bones, immune system, kidneys and red blood cell count, with some of the more common symptoms including bone pain and fatigue, a symptom of anemia. Multiple myeloma is a rare form of cancer, with more than 26,000 new cases in the U.S. and 114,000 new cases globally per year.

About the Multiple Myeloma Research Foundation (MMRF)
The mission of the Multiple Myeloma Research Foundation (MMRF) is to find a cure for multiple myeloma by relentlessly pursuing innovation that accelerates the development of next-generation treatments to extend the lives of patients. Founded in 1998 by Kathy Giusti, a multiple myeloma patient, and her twin sister Karen Andrews as a 501(c) (3) nonprofit organization, the MMRF is a world-recognized leader in cancer research. Together with its partners, the MMRF has created the only end-to-end solution in precision medicine and the single largest genomic dataset in all cancers. The MMRF continues to disrupt the industry today, as a pioneer and leader at the helm of new research efforts. Since its inception, the organization has raised over $330 million and directs nearly 90 percent of the total funds to research and related programs. To learn more, visit http://www.themmrf.org.

About CURE Media Group
CURE Media Group is the leading resource for cancer updates, research and education. It combines a full suite of media products, including its industry leading website, CUREtoday.com; innovative video programs, such as CURE Connections®; a series of widely attended live events; and CURE® magazine, which reaches over 1 million readers. CURE Media Group is part of the Cranbury, N.J.-based Michael J. Hennessy Associates, Inc., family of businesses, which includes the acclaimed OncLive® (http://www.onclive.com) platform of resources for the practicing oncologist. For more information, visit http://www.curetoday.com or http://www.mjhassoc.com.

About Takeda Pharmaceutical Company
Takeda Pharmaceutical Company Limited is a global, research and development-driven pharmaceutical company committed to bringing better health and a brighter future to patients by translating science into life-changing medicines. Takeda focuses its R&D efforts on oncology, gastroenterology and central nervous system therapeutic areas plus vaccines. Takeda conducts R&D both internally and with partners to stay at the leading edge of innovation. New innovative products, especially in oncology and gastroenterology, as well as our presence in Emerging Markets, fuel the growth of Takeda. More than 30,000 Takeda employees are committed to improving quality of life for patients, working with our partners in health care in more than 70 countries. For more information, visit http://www.takeda.com/news.