The Yukon Quest International Sled Dog Race, "the most difficult sled dog race in the world," started February 4th and will cover 1,000 miles of extreme and majestic terrain between Whitehorse, Yukon Territory, Canada and Fairbanks, Alaska. 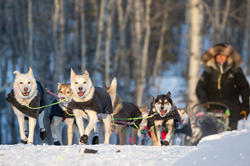 High winds and whiteout conditions, rough gravel, hard packed snow, frigid open water, mountainous terrain and river flats can speed up the race or slow it to a crawl

The 34th Yukon Quest International Sled Dog Race began February 4, 2017 in Whitehorse, Yukon Territory, Canada and will finish on the frozen Chena River in downtown Fairbanks, Alaska. Dog mushing is the Official Alaska State Sport, with the Yukon Quest and the Iditarod being Alaska’s premiere mushing events. The Yukon Quest Trail follows historical gold rush and mail delivery dog sled routes. Once the transportation “highways” of the northern frontier, the Yukon Quest Trail now comes alive each February with the frosty breath and haunting howls of dog teams consisting of one human musher and 14 canine athletes.

Race participants follow a 1,000-mile trail that traverses some of the most sparsely populated and most remote and pristine country on the North American continent. Temperatures can vary dramatically from -80F to 30F. High winds and whiteout conditions, rough gravel, hard packed snow, frigid open water, mountainous terrain and river flats can speed up the race or slow it to a crawl. Mushers driving sleds loaded with 250-300 pounds of gear are challenged by changes in elevations as they climb windy and drifted mountain summits, and the sheer distances between checkpoints, some over 100 miles.

Twenty-one mushers took off from the start line in Whitehorse. This year’s participants include three past champions, all Alaskan residents. Allen Moore won back-to-back titles in 2013 and 2014; Hugh Neff took the crown in 2012 and 2016; and Brent Sass, who won it all in 2015. The 2017 Yukon Quest should take 10 to 14 days to run 1,000 miles through nine communities en route to Fairbanks. For the latest news and information, visit yukonquest.com.

About Explore Fairbanks
Explore Fairbanks is a non-profit marketing and management organization whose mission is to be an economic driver in the Fairbanks region by marketing to potential visitors and optimizing the visitor experience. Explore Fairbanks markets Fairbanks as a year-round destination by promoting local events, attractions and activities to independent travelers, group tour operators, travel agents, meeting planners and the media as well as by developing public policy and infrastructure to achieve marketing objectives. Find out more at explorefairbanks.com.