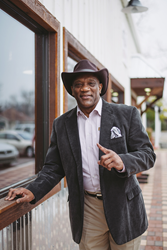 Billy Sims, former Detroit Lion, Heisman Trophy Winner and co-founder of Billy Sims BBQ will sign autographs and meet with fans Feb. 11, from 11 a.m. to 2 p.m. at the newest Kansas location in Emporia at 737 W 6th Street. This is the second of nine planned openings for Billy Sims for 2017 and is the 6th restaurant in Kansas.

Tulsa-based Billy Sims BBQ is the nation’s fastest growing fast-casual BBQ restaurant and was named one of the nation’s 10 best barbecue chains by The Daily Meal. The extensive menu includes nine meats, ranging from favorites such as ribs, brisket, pulled pork, chicken, to some unique offerings like turkey and bologna. All meats are smoked daily over pecan wood on-site at every restaurant, with careful attention to the proven recipe and process steps that have proven so popular among diners. Billy Sims BBQ completes the great dining experience with traditional sides – often with a twist – such as baked potatoes cooked in the smoker, potato salad, freshly smoked corn-on-the-cob, coleslaw, baked beans with brisket, green beans with bacon and entrée size salads with fresh vegetables.

“The state of Kansas has become one of the fastest-growing locations for our brand,” said Jeff Jackson, co-founder and CEO of Billy Sims BBQ. “Kansans have discovered Billy Sims BBQ and love the food, the service and the affordable prices.”

“We have grown our franchise quickly in Kansas due to the high demand and great reception we’ve received across the state,” said Dave Dunn, franchisee. “Emporia is a great city and we look forward to introducing the community to our barbecue.”

Named a Franchisee Satisfaction Award Winner for 2016 and 2015 by Franchise Business Review and a Future 50 fastest-growing small chain restaurant in 2015 by Restaurant Business, Billy Sims BBQ is consistently ranked highly by franchisees for its leadership, training and operations support, financial performance and general satisfaction. For more information on Billy Sims BBQ, visit http://www.billysimsbbq.com.