Uncle Maddio's Pizza will launch its first-ever nationwide contest on National Pizza Day – February 9th. Guests are invited to show their pizza making creativity by sharing their own creation on social media with the hashtag #MyMaddios. 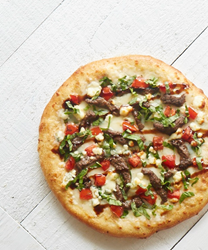 Uncle Maddio's Pizza will launch its first-ever nationwide contest on National Pizza Day – February 9th. Guests are invited to show their pizza making creativity by sharing their own creation on social media with the hashtag #MyMaddios. The guest whose original pizza creation receives the most likes will win a trip for four to Orlando, FL, sponsored by Coca-Cola. Uncle Maddio’s will also choose three of its favorite pizzas and add them to the menu for a limited time offer.

There are three easy steps to enter:

1.    Create your own pizza. Choose from three crusts, seven sauces and 40 toppings to build your creation just the way you like it. That’s 132,651 different combinations!
2.    Snap your pizza masterpiece. Take a photo of your pizza making sure you show all the ingredients.
3.    Post your pizza to social media using the hashtag #MyMaddios. Guests can share on Facebook, Instagram or Twitter. Make sure the post is public and share by February 28, 2017. The pizza with the most likes, comments and shares will win!

The grand prize winner will receive a trip for four to Orlando, Fla, sponsored by Coca-Cola.    The first and second runners up will receive free pizza for a year, which includes one 9-inch, 3-topping pizza once a week for 52 weeks. Additionally, Uncle Maddio’s will pick three of its favorite pizza creations to be featured during the second quarter as a limited time offer on menus at Uncle Maddio’s locations nationwide.

“Day after day our pizza makers see delicious creations from our guests that are good enough to be on the menu,” said Matt Andrew, CEO of Uncle Maddio’s. “This contest is a great way for us to celebrate and recognize our guests and their pizza making creativity. What better way to tell our story than from user-generated content?”

This contest is the first of its kind for the fast casual pizza franchise. Uncle Maddio’s will support the contest with paid media advertising, digital outreach and in-store table tents, window clings and flyers.

Uncle Maddio’s is a next generation, New York-style pizza restaurant that lets guests build their own pizza exactly how they want it and cooked in fast-bake ovens and served to their tables in under eight minutes. Guests choose from one of three crusts, including a delicious gluten-free option, 40 toppings, 7 sauces, 27 vegetables and 15 meats. Everything is fresh and made in-store daily. Create-Your-Own salads and Foldwich™ sandwiches round out the Italian-inspired menu. Additionally, the restaurant offers a selection of craft beers and wine.

Since launching its aggressive growth plan in 2008, Uncle Maddio's has signed franchise agreements with 57 different entities in 18 states. Many of Uncle Maddio's franchisees have previous multi-unit experience with Jimmy John's, Firehouse Subs, Dairy Queen, McDonalds, Burger King, Krystal, Papa John's, Domino's, and Golden Corral. Uncle Maddio's is on track to have 300 restaurants open in five years with 1,000 units in development.

With more than 1,350 Pizza Makers making more than 5,000,000 pizzas a year, Uncle Maddio's Pizza is category leader of the create-your-own, fast casual pizza restaurants. Operating almost 50 locations in 15 states, Uncle Maddio's has more than 250 units in development. Uncle Maddio's pizzas are customizable, made-to-order, and served up fast for about $8. With four pizza sizes; three types of crusts, including gluten-free; seven sauces and 40 fresh toppings, many vegan or gluten-free, Uncle Maddio's has the freshest and largest menu in the category. The restaurant's unique fast bake ovens offer the most throughput in the industry and can produce 200 pizzas per hour. Uncle Maddio's also serves Foldwich™ sandwiches and gourmet salads - all freshly prepared as are 30 other menu items that are made on-site daily. Uncle Maddio's 'Served with Love' philosophy and restaurant is for everyone - children and families, college students, the young and the young at heart - and includes extensive community involvement. Based in Atlanta, the Uncle Maddio's management team has 50 years combined experienced in the fast casual category.