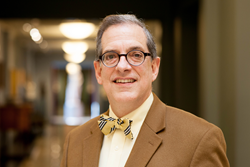 In all my years here I’ve never been bored, and my love for this place and its collection has only grown.

NEWARK – When the Newark Museum’s Chief Curator Ulysses Grant Dietz steps down from his position at the end of 2017, he will leave behind a 37-year legacy marked with silver, jewels, ceramics and a Victorian mansion.

Dietz will transition from his post as the Museum’s Chief Curator and Curator of Decorative Arts to Curator Emeritus as of December 31st. In preparation for his new role, Dietz is giving Museum visitors a chance to revisit a broad representation of the objects he helped bring into its collections. Each of these reinstallations in the decorative arts galleries is intended to focus on both the Museum’s history of interest in the impact of design and craft on domestic furnishings, and also on Dietz’s own evolving vision for the vast collection in his care.

“We have an unbroken history of collecting modern objects that represent the idea that art is everywhere, not just in paint and marble and bronze,” Dietz said. “Our founding premise was that art should be accessible – intellectually and financially – to everyone who walked in our doors. In 1909 that was a radical vision and it has informed my work as a curator for 37 years.”

The following reinstallations will open February 22:

Dietz will be honored at the Newark Museum Volunteer Organization Annual Tea on May 16.

“I wanted to retire before everybody wanted me to retire. I want another generation to take on the challenges that I faced when I started here, at 24 years old, in 1980,” Dietz said. “In all my years here I’ve never been bored, and my love for this place and its collection has only grown. I want to see someone else have the same fun I’ve had for so long.”

Dietz joined the Museum in 1980 as its Curator of Decorative Arts, after receiving degrees from Yale University and the University of Delaware’s Winterthur Program.

The first exhibition Dietz curated for the Museum was A Festival of Quilts in 1980. Since then, he has curated more than 100 exhibitions and installations that showcased themes in the decorative arts such as art glass, studio ceramics, 19th-century furniture, three centuries of American silver and Newark’s jewelry industry. Dietz was named Chief Curator in 2012. Throughout his career Dietz has maintained a strong interest in the 19th century; it has since grown to encompass the 2oth and 21st centuries. His newest passion is jewelry, and he has always tried to tell the stories of Newark and New Jersey through objects made and used here.

An example of an exhibition that combined these two interests is The Glitter and the Gold: Fashioning America’s Jewelry, a show Dietz co-curated in 1997 about the gold jewelry industry in Newark. Newark was the center of solid-gold jewelry manufacturing from the 1850s to the 1950s and made 90 percent of the 14-karat jewelry produced in America.

More recent examples of the intersection of the glitter and Newark’s storied history include Dietz’ establishment and 2015 reinstallation of the Lore Ross Jewelry Gallery. Jewelry from Pearls to Platinum to Plastic highlights the wide array of materials, both precious and humble, that have been used over the centuries to create things of beauty for personal adornment; City of Silver and Gold from Tiffany to Cartier is a visual documentation of the rise of the city’s gold and silver industry from modest beginnings in the early 1800s to national prominence by the turn of the 20th century; and Hot, Hotter, Hottest: 300 Years of New Jersey Ceramics, a new permanent gallery that explores the rich legacy of New Jersey’s pottery and porcelain makers.

Perhaps Dietz’s legacy is best reflected in the Museum’s Gilded Age mansion, the Ballantine House, built in 1885 for John and Jeannette Ballantine of the celebrated Newark brewing family. The house was purchased as office and classroom space by the Museum in 1937 and was partially restored for the National Bicentennial in 1976. Designated a National Historic Landmark in 1985, the Ballantine House was completely restored and reinterpreted between 1992 and 1994. House & Home presents the house as a case study for the idea of “home” as it existed by the 1890s in America, and the full range of the decorative arts collection is displayed to explore how Americans have always expressed themselves by the things they chose to fill their homes.

“After 23 years, House & Home is still virtually unique among American museums and historic houses. It is perhaps my proudest moment as curator,” Dietz said.

As he prepares his exit, Dietz continues to update House & Home, with new interactive galleries and a new interpretive installation that looks closely at specific aspects of the Ballantine family’s life in the house: Life, Love, Death: The Ballantines.

“Ulysses’ curatorial vision has helped build the Museum’s outstanding reputation in the local, regional and national community,” said Steven Kern, the Museum’s Director and CEO. “We are grateful to Ulysses for his dedication to the Museum, and we wish him all the best in his future endeavors.”