In the past, Mexico’s rainforests suffered extensive logging and were in grave danger, but Mexican ecologist Professor José Sarukhán was able to convince the then-President to build a government department to exclusively track the country’s rainforests and protect their biodiversity. For this and other contributions – Professor Sarukhán has been chosen as the winner of the 44th Tyler Prize for Environmental Achievement. 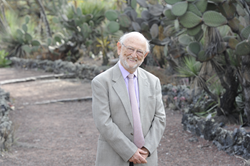 The Tyler Prize Executive Committee will award the 2017 Tyler Prize for Environmental Achievement to pioneering Mexican ecologist Professor José Sarukhán, for his scientific contributions to the field of biological diversity and institution-building.

At a time when the fate of Mexico’s rainforests was in critical danger from extensive land clearing, then-Mexican President Carlos Salinas turned to Sarukhán for advice on how to show the global community that the country valued its natural resources. In response Sarukhán masterminded a federal government department focused entirely on biodiversity – one of the first of its kind in the world. It became known as CONABIO, the ‘National Commission for the Knowledge and Use of Biodiversity’ (Spanish: Comisión Nacional para el Conocimiento y Uso de la Biodiversidad). Now in its 25th anniversary year, CONABIO runs what is considered as the largest electronically accessible national biodiversity database in the world, with over 11.2 million specimens. CONABIO is an interministerial Commission (spanning 10 federal ministries) that acquires knowledge and shapes policies on conservation and the sustainable use of Mexico’s natural resources. This integrated approach to conservation has proven so successful that President Obama’s advisory council recommended it be used as a model for the United States.

Tyler Prize Executive Committee Chair Julia Marton-Lefèvre said Sarukhán was being recognized for identifying a scientific problem and creating a solution that was built into his nation’s laws and regulations, through strong institutions.

“As a world-class scientist – Sarukhán published in all the most esteemed scientific journals and got the highest prizes that every scientist wants. But he knew that seeking ‘knowledge for the sake of knowledge’ was no longer enough, and that saving the biodiversity in Mexico’s forests would take much more than just excellent science.

“Few scientists could convince a President to find budget for a federal-level conservation agency – but Sarukhán did, and because of that, Mexico’s forests now have an institutional watchdog actively protecting their biodiversity.

“Sarukhán has made sure that his science has led to practical solutions that are changing peoples’ lives and changing the way the environment is able to provide us a home for the future,” said Marton-Lefèvre.

As the winner of the Tyler Prize, Sarukhán will receive a $200,000 cash prize and join the ranks of laureates that include Jane Goodall and E.O Wilson.

Sarukhán said he was “honored and humbled” by the Prize, and attributed his social responsibility to his mentors, eminent biologist Arturo Gómez-Pompa (himself a Tyler Laureate) and botanist Dr. Efraim Hernández Xolocotzi. In the 1970’s, both mentors had been two of the most effective voices of criticism of the government's rainforest clearing. The experience was formative for Sarukhán, and helped him to understand that science was ‘something that had to be fought for’.

“Scientists should make people aware of the implications that research has on their surroundings and their own health. I believe that academia has a contract with society, to be outspoken if information is not being used the way it should be – perhaps because of political or economical reasons. I know that not everyone is built to do that kind of work, but if one feels they can take on this role, which might be called activism or politics, I think one has to do it,” said Professor Sarukhán.

As CONABIO’s national coordinator, Sarukhán has worked under five different presidential administrations from both sides of the political spectrum – a role that has often required him to defend biodiversity as a national priority.

“Scientists should defend a fundamental principle: humankind cannot move forward if governments pretend not to know, or not to be based, in fact and science.”

Harold Mooney, the 2008 Tyler Prize Laureate and Professor of Environmental Biology at Stanford University, said that Sarukhán is an extraordinary scientific leader and statesman.

“He was one of the first academics to recognize the importance of building a link between conservation and development policies based on scientific knowledge.”

Professor José Sarukhán will be honored at an Award Ceremony in Washington DC on May 4th. Earlier that day he will give a special lecture and appear in a panel discussion. Members of the press interested in attending should email the Media Director Bec Gill (contact details supplied).