The time is ripe for adult fairy tales. The Hare, Raising Truth is not for children or prudes. This Grimm's Fairy Tales / The Twilight Zone-style mashup will leave readers questioning their desires. 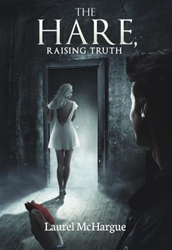 ...The Hare, Raising Truth will fill a niche 'and scratch an itch' for readers who enjoy bizarre fantasy, a quick read, and a surprise ending.

Laurel McHargue wants to know, “When was the last time you read an adult fairy tale, or any fairy tale, for that matter?” She believes her latest publication, The Hare, Raising Truth, will fill a niche “and scratch an itch” for readers who enjoy bizarre fantasy, a quick read, and a surprise ending. "This is not a story you'll read to your children at night."

“It’s not what I had intended to write,” said McHargue, “but my lustful house muse took over at some sleepless hour and I went along with her inspiration.” She credits her fascination with Grimm’s Fairy Tales and an early diet of The Twilight Zone television episodes with inspiring what she calls her twisted tale. “I loved Rod Sterling’s voice and the way he used the second-person ‘you’ point of view to create a sense of unease. Writing a story from that point of view was challenging, but it really helped me to project some crazy ideas onto my main character.”

McHargue’s other publications fall into the realm of education, but she does not want to be restricted as an author to one market. She plans "to write in as many genres as possible and to entertain all kinds of readers.” Her novel “Miss?” is a loosely fictionalized account of her first year teaching in a doomed middle school, and her YA fantasy adventure Waterwight will be a trilogy. On her website she writes about “life, real and imagined.” Like many authors, she would love to see her work on film or television someday.

The Hare, Raising Truth is available for ebook pre-order now and will be available in paperback from Amazon and Ingram on release day, March 12. “I thought it would be appropriate to release this book on the next full moon. You’ll understand when you read it.”

Waterwight: Book I of the Waterwight Series2016 Silver EVVY Award for Fiction/Fantasy with talking animals, shapeshifters, superpowers, a mountain spirit, and a coming-of-age story. Great resource for building vocabulary.

Author Laurel McHargue as a cadet at The United States Military Academy, West PointMcHargue plans to write about her experiences as a cadet and an Army Officer someday.