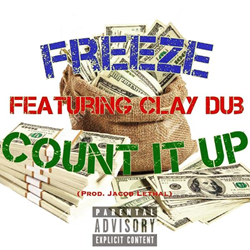 Freeze, 19, is a Hip-Hop artist from Los Angeles CA. As a young boy he grew up in a disfunctional household, in which music became his escape from everything negative surrounding his life. He wrote his first verse in the 9th grade after school one day at a friend's house and recorded it that same day. Since then he has continued to gradually progress with his music and his aspirations are to keep pushing his career forward.

His single "Count It Up" comes as a surprise to both him and his fans. He came across the beat on YouTube and freestyled the hook several times over until it got stuck in his head. A week later he went to the studio to record it and his engineer at the time, Clay Dub, an artist as well, harmonized on the hook to add some depth and layers. For sometime after all that was completed was his first verse and the hook, so he went back a few weeks later, had Clay added verse, and completed the track to make it a hit. The new single is currently available to stream and download on the Coast 2 Coast Mixtapes website.