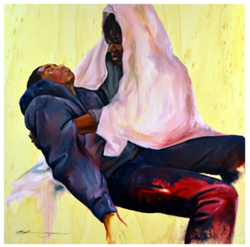 “I wanted to dig deep into the feelings of despair and despondency that some within the black community have concerning their plight of poverty and ethnicity,”

The exhibition speaks to the contemporary social and racial climate. It was inspired by a novel by Bill Harris as well as Greek and African mythologies.

“I wanted to dig deep into the feelings of despair and despondency that some within the black community have concerning their plight of poverty and ethnicity,” Gay says.

Her works bring forth commentary regarding police brutality, gang and prison culture, lack of educational opportunity, and feelings of self-hatred that have arisen in the black community.

Shanequa Gay’s exhibit will be on display through April 7, 2017 in the Martha Cloud Chapman Gallery in the Campus Life Building on Wofford College’s campus. Viewing is free and open to the public.

Gay's work was featured in the 2014 Lions Gate film Addicted, the television series Being Mary Jane, and OWN series Greenleaf. She was chosen by The Congressional Club to be the illustrator for the 2013 First Lady's Luncheon hostess gift. Her work is included in both public and private collections including, actor Samuel Jackson. Gay has exhibited her work at prestigious venues and events, such as the Chattanooga African American Museum, Hammonds House Museum, Hunter Museum of American Art, Auburn Avenue Research Library on African American Culture and History, and many more.

Shanequa Gay is a graduate of the Savannah College of Art and Design and the Art Institute of Atlanta. Currently, she is an Artist-in-Residence at The Goat Farm through The Creatives Project Artist-in-Studio Program (2015-2017).

To learn more about the exhibit, visit https://www.wofford.edu/newsroom/2017/Fair-is-Foul-and-Foul-Aint-Fair-exhibition/.