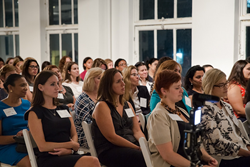 Professional women screening She Started It: A Documentary on Women Tech Founders

She Started It is meant to be used as a catalyst for conversation, awareness, community building and finally action, to provide better support for women entrepreneurs and inspire more women to dream bigger.

Ellevate Network will be hosting nationwide screenings of She Started It: A Documentary on Women Tech Founders at chapters across the country including Boston, Boulder, Charleston, Charlotte, Chicago, Cincinnati, Denver, Houston, Long Island, Los Angeles, Madison, New York, Philadelphia, Phoenix, Pittsburgh, San Diego, San Francisco, and Washington, DC. The screenings are in honor of International Women’s Day and Women’s History Month and coincide with Ellevate’s #TakeBackFeminism campaign, a call for all people to reclaim the feminist movement as an inclusive and necessary part of modern day society.

President of Ellevate Network Kristy Wallace said, “We’re honored to be screening such an important and honest film about trailblazing women in entrepreneurship. By opening up the conversation about brave women doing great things in business, we’re exposing a larger audience to not only the challenges women business leaders face, but shine a light on the inspirational stories of those women making real change in the world through their persistence, resourcefulness, and of course, their [support] networks.”

Nora Poggi and Insiyah Saeed, directors of She Started It, said, "We are very excited to partner with Ellevate Network to bring our film to such a wide audience across the United-States. We believe networks such as Ellevate have the power to lift women up through community and mentorship. Our film She Started It is meant to be used as a catalyst for conversation, awareness, community building and finally action, to provide better support for women entrepreneurs and inspire more women to dream bigger. Ellevate will bring this conversation to a wider audience and we cannot wait to see the impact it creates."

We are so pleased to announce this special event. Each screening will be followed by a guided discussion about the film and networking with local professional women of the chapter. Help us inspire the next generation to dream bigger, and urge today’s generation to support women entrepreneurs.

To find your local screening, click here, choose your chapter’s city, and register for the event.

About Ellevate Network: Ellevate Network is a global professional women's network committed to elevating each other through education, inspiration, and opportunity. Our mission is to close the gender achievement gap in business by providing women with a community to lean on and learn from.