Grownups joined in to take Tai Chi lessons, dance in the silent dino disco, and tested their acrobatic skills in the museum's newest exhibit, Circus Starring YOU! 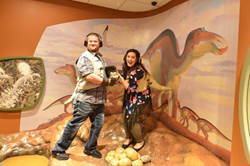 Dinos nesting during Museum by Moonlight

Who says children's museums are just for kids? Grownups had just as much fun during Museum by Moonlight.

Museum by Moonlight sold out at The Children’s Museum of Indianapolis. On Feb. 25, 2017, from 8 p.m. until the Water Clock struck midnight, American Funds from Capital Group and the world’s largest children’s museum threw a party for kids at heart.

Museum by Moonlight is exclusively for adults of all ages (21 and older). The grownups explored five floors of new and classic exhibits, enjoyed a cash-bar, and refueled with free food samples from restaurants like The Melting Pot, Buca di Beppo, Insomnia Cookies, and more.

Here are some of the activities that took place:

All proceeds benefit The Children's Museum Fund, which ensures that all children and families, regardless of income, can experience the museum.

The over 21 crowd took time out from adult beverages, food, and playing for a Tai Chi lesson in Take Me There ChinaThe Children's Museum of Indianapolis features interactives for all ages

This young lady showed off her big muscles in the strong 'man' contestCircus Starring YOU! at The Children's Museum of Indianapolis