From New England to the World, NECC’s Mission of Helping Children with Autism is Recognized with Prestigious Award 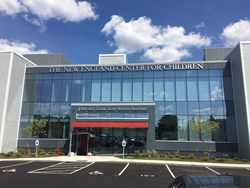 For 3-year-old Muhammad Aboud* and his family in Abu Dhabi, United Arab Emirates, life was a series of frustrating challenges. Muhammad had autism, and as in many foreign countries, diagnosis and effective treatment were not readily available. Muhammad faced daily struggles with activities such as brushing his teeth, communicating, and playing with friends. What is simple and effortless for most children is an obstacle for children like Muhammad.

Muhammad’s plight is an all-too common story in many nations. As the prevalence of autism continues to rise—1 percent of the world’s population has the diagnosis, including 1 in 68 children—treatment remains scarce and inconsistent in quality. This leaves millions of children and families around the world coping with the daily struggle of living with autism, their lives filled with conflict, obstacles and isolation. Efforts by U.S. experts and schools to share best practices and collaborate internationally can help bring more effective autism treatment abroad.

The New England Center for Children® (NECC®), a global leader in education and research for children with autism, has been doing just that. NECC announced today it has received the 2017 Award for International Dissemination of Behavior Analysis from the Society for the Advancement of Behavior Analysis (SABA), the peer academic organization of applied behavior analysis (ABA). The highly respected award is given to a person or organization demonstrating a significant and sustained contribution to the dissemination and development of ABA outside of the United States. In 2005, NECC also received the SABA award for Enduring Programmatic Contributions to Behavior Analysis.

“All of us at The New England Center for Children are honored to receive this prestigious award,” said Vincent Strully, Jr., CEO and Founder of The New England Center for Children. “I would like to thank our many teachers, behavior analysts, and researchers whose dedication over the past 42 years has enabled NECC to help thousands of children with autism and their families.”

In granting the prestigious award, SABA noted NECC’s four decades of work in ABA and its dedicated behavior analysts who have established programs and supported individuals and organizations around the world.

“The SABA Board wishes to applaud NECC for its longstanding work providing behavior analysis services, training service providers, and establishing programs across five continents,” said Dr. Maria Malott, CEO of ABAI. “The reach and influence of NECC are truly inspiring, and the success of NECC Abu Dhabi in particular illustrates the impact of disseminating applied behavior analysis best practices. NECC has played a large part in making inroads for behavior analysis in the Middle East and worldwide.”

Helping Muhammad and Touching Lives Abroad – The Power of ABA

NECC has helped hundreds of children in the UAE through its Center and through consulting services in 20 schools. An important part of NECC’s international dissemination of ABA is the integration of local language and cultural and religious practices into the curriculum. In the case of Muhammad in the UAE, religious practices were important, as were local customs in toilet training, dining etiquette, interaction with male and female peers, and other skills and social nuances unique to Emirati culture. Guided by NECC’s ABA program, Muhammad achieved independence that enabled the challenged youth to grow into an accomplished and capable young man studying engineering at a respected university.

Key to NECC’s mission is training and educating local staff to ensure knowledge transfer, program sustainability, and local growth of ABA programs. NECC trained the Emirate’s first Board Certified Behavior Analyst (BCBA) and collaborates with Emirates College for Advanced Education to provide ABA training and internships to degree candidates. In addition to Abu Dhabi, NECC operates in Dubai in the UAE; Doha, Qatar; Kuwait City, Kuwait; Gurgaon, India; Riyadh, Saudi Arabia; and London, England, and employs more than 50 percent of the BCBAs in the entire Gulf Region. More schools and centers have followed suit in applying ABA practices, looking to achieve the results of NECC.

“Parents in the United States are in a nightmare struggle with public school systems to get their children with autism the services they need. With the exception of the UAE, the situation abroad is worse – underfunded and underperforming if not absent altogether,” said Mr. Strully. “All too often children like Muhammad get lost between public schools, hospitals and psychiatrists. We must help spread internationally the proven techniques of ABA and establish best-in-class intervention and education services for children with autism. By empowering teachers worldwide with the knowledge and tools of applied behavior analysis, together we can create more success stories like Muhammad’s.”

The Society for the Advancement of Behavior Analysis (SABA) was chartered in 1980 for the welfare, financial support, and advancement of the behavior analysis field. SABA is affiliated with the Association for Behavior Analysis International (ABAI), the primary membership organization for those interested in the philosophy, science, application, and teaching of behavior analysis. More information is available at http://saba.abainternational.org.

The 2017 Award for International Dissemination of Behavior Analysis will be presented to NECC at the 2017 ABAI Annual Convention in Denver, Colorado, on May 27, 2017.

About The New England Center for Children

The New England Center for Children® (NECC®) is a world leader in education, research, and technology for children with autism. For more than 40 years, our community of teachers, researchers and clinicians have been transforming lives and offering hope to children with autism and their families. NECC’s award-winning services include home-based, day, and residential programs; public school partnerships and consulting; the John and Diane Kim Autism Institute; and the ACE® ABA Software System used by more than 4,620 students in 24 states and nine countries. A 501c3 non-profit, The New England Center for Children is based in Southborough, MA, and also operates a center in Abu Dhabi, UAE. More information is available at http://www.necc.org.

*Due to confidentiality policy, real names were not used.