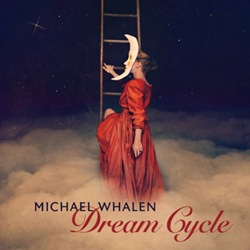 “This entire album is about time,” Whalen says. “It’s about pulling time apart and putting it back together."

Emmy award-winning composer and Yamaha artist Michael Whalen wants his music to put you to sleep. His new album, “Dream Cycle” (Valley Entertainment) succeeds at this, inspiring rest, relaxation, wellness, meditation and ultimately, sleep—a crucial activity that eludes so many of us, particularly in these unsettling post-election days.

“Adults have absolutely no idea how to go to sleep,” Whalen contends. “We do sleep, but we pass out. We ‘crash.’ But the intentional act of 'putting ourselves to bed' ended when our caregivers/parents stopped reading us stories when we were kids and uttered, 'time to go to sleep.’”

And therein lies the problem for most adults. “We do everything wrong. We let our mobile devices light up incessantly on the nightstand, which prevents us from dozing off,” Whalen maintains. “We only unplug from white light “screens” when our heads hit the pillow. And we don’t lay in bed to relax, listen to music or read a book. And finally, we don’t concentrate on our breathing.”

Sleep is such an important part of everyday life—something Whalen learned first-hand from 300,000 of his fans who listen to his music each month on Spotify, largely to relax, meditate or sleep.

Struggling with his own severe sleep apnea, and motivated by saving his own life, at age 50, Whalen started on this journey by transforming key elements of his daily routine. At his heaviest, Michael weighed nearly 345 pounds. With a strict doctor guided diet, regular exercise, a daily 7.5-mile commute from Brooklyn to Manhattan and a daily scheduled sleeping regime, Whalen has lost more than 120 pounds so far and his goal of weighing 175 pounds is in sight for the first time since his teenage years.

With Dream Cycle, Whalen made an album specifically for his fans and for himself, spending two months creating nearly a thousand electronic and sampled sounds, textures and loops from a variety of sources and instruments. “A lot of the music on the recording is very melodic so I wanted to focus on creating sonic environments around the melodies,” he says. “That’s a very different process from writing melodies; creating sounds like this is like jumping into a vat of paint and splashing around to see what I come up with.”

Whalen also engaged vocalists for Dream Cycle: Maine-based a cappella singer, Amy Robbins-Wilson sings a beautiful rendering of “Hush (Little Baby, Don’t You Cry)”; celebrated Celtic artist Liz Madden offers her talents on a hypnotic treatment of “Little Star (Twinkle)”; Based on a one-hour conversation with Whalen, Kathy Fisher of the Los Angeles-based band Fisher did a vocal reimagining of Eurythmics’ 1980s super-hit “Sweet Dreams (Are Made Of This)”; with shadows and cinematic colors replacing the original groove-driven conception. And The New Tarot, a wonderful new sister duo from Brooklyn, cast a vocal spell on the Cranberries’ hit song “Dream” complete with Whalen’s gorgeous re-harmonized arrangement.

In the end, Dream Cycle harkens back to Whalen’s past offerings, Nightscenes: Music For The Evening (1996) and Like Rain Through My Hands (2004). But it also stands separate from these landmark ambient albums. The main delineator, as he sees it, is rhythm.

“This entire album is about time,” Whalen says. “It’s about pulling time apart and putting it back together. Late at night, lots of people are like, ‘Oh, my God, look at the time! I’ll never get to sleep!’ So, time is one of the underlying tensions on Dream Cycle. This is one way that the vocabulary of ambient music has changed: With deep respect and love for Brian Eno, Steve Hillage and other innovators of the ‘70s, so many kinds of music have come along since then that our conversations about music are no longer about genre. Now it’s only about how the music we experience sounds and feels. Ambient music has evolved and using rhythm as a way of both setting and breaking-up patterns is the engine of this project.”

Whalen believes that the purpose of making music is to make a difference. In this case, he hopes that Dream Cycle, coupled with the wisdom he has received from the medical community, gives peace to those who are in search for a good night's sleep. Not only is the album an aide, but also a guide to getting there. Top sleep specialist, Dr. Ron Cridland, says “Winding down before bed is a key habit for improving their sleep. Listening to Michael’s soothing “Dream Cycle” CD is a great way to create the mood for letting go and winding down before bed.”

For those who want to learn how to slow down, unplug and let their body do the work before going to sleep, Whalen will perform songs from his Dream Cycle album on the Yamaha CP4 keyboard and MX49 synthesizer at a Sleep and Wellness Concert on Sunday, March 5th, beginning at 7:30 p.m. This unique concert experience, which combines Whalen’s gorgeous state-of-the-art ambient music with state-of-the-art instruction on how to relax before going to sleep, will be held in the Renee Weiler Concert Hall at Greenwich House Music School, 46 Barrow Street, Manhattan. Tickets can be purchased at http://4wrd.it/SLEEPWELLNESSCONCERT

So, does Dream Cycle achieve its goals? Whalen smiles. “It did for me. The process of using this music (in its rough versions) to help me go to sleep had a huge impact on the final choices I made in creating it.”