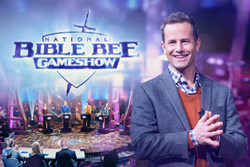 On the one year anniversary of the launch of Facebook Live, the National Bible Bee Game Show, hosted by Kirk Cameron, premieres April 4th at 8pm Eastern on Facebook Live sponsored by Museum of the Bible. Seventy-two young people ranging from 7 to 18 years of age compete for $270,000 in prize money.

“Since the National Bible Bee started in 2009, I’ve been a fan and supporter,” Cameron, father of six and a well known actor/producer/speaker, said of the high-energy reality game show style contest. “The National Bible Bee Game Show stirs up fun, excitement and a lot of ‘intended consequences’ in homes worldwide.”

The seventy-two National Bible Bee Game Show contestants are chosen from the annual National Bible Bee grouped as Primary (ages 7-10), Junior (ages 11-14) and Seniors (ages 15-18). From each age division the top 3 percent of contestants compete in the bracket-style Scripture-knowledge tourney. In preparation, young people commit to memory up to 840 verses from the Bible in just 90 days prior to the competition.

Real estate entrepreneurs, authors and speakers, Jason and David Benham are no strangers to television. Their show on HGTV was cancelled due to the stand they took for their faith. “Watching these young people stand and recite Scripture from memory is incredible,” says David Benham. Jason quickly added, “And to do it with that level of boldness and confidence is truly inspiring.”

“There is something special that happens when young people commit the Bible to memory,” says Steve Green, Chairman of Museum of the Bible, which opens in November in Washington, D.C.. “These kids are having fun and we are excited to be a part of its ground-breaking premiere on Facebook Live.”

Produced by Enthuse Entertainment, the National Bible Bee Game Show has reached 80 million homes in the previous season on three TV networks and was broadcast globally on NRB Network, CTN and UPLIFT TV. But for this season’s 30 one-hour episodes, the show is being broadcast on Facebook Live beginning April 4th.

According to Facebook, there are more than 1.9 billion people active every month on the Facebook platform. This will be the first ever television series to broadcast on Facebook Live. Bobby Downes, CEO of ChristianCinema.com, says “Facebook Live is the future of television. It allows us to choose our audience, pick the airtime and, most importantly, engage with the viewers as they watch this incredibly inspiring competition.” Downes added, “Over the span of this show we anticipate 30 million people will tune in and for those who miss an episode, a season pass or individual episodes can be purchased on-demand at ChristianCinema.com."

ABOUT NATIONAL BIBLE BEE
For the past 8 year the National Bible Bee’s (BibleBee.org) mission has been to engage young people in the memorization and study of God’s Word and provide opportunities to proclaim it through local, national and broadcast competitions.

ABOUT MUSEUM OF THE BIBLE
Museum of the Bible (museumoftheBible.org) is an innovative, global, educational institution whose purpose is to invite all people to engage with the Bible. In 2017, Museum of the Bible, which aims to be the most technologically advanced museum in the world, will open its 430,000-square-foot nonprofit museum just three blocks from the Capitol in Washington, D.C. A digital fly-through and a 360-degree hardhat tour of the museum are available on youtube.com/museumofBible.

ABOUT CHRISTIAN CINEMA
In 1999, ChristianCinema.com was born out of a desire to connect audiences with the best in faith-based movies. The market leader in faith-based digital on-demand, Christian Cinema has earned the trust of families of faith. The service provides easy access to a personal movie library across multiple devices, enabling users to watch anytime, anywhere and with no subscriptions and no commitments. New films added every week, there are new releases and new discoveries; dramas, documentaries, short films, educational and more. Chosen from the leading Christian filmmakers, this destination is a rarity in the world of cinema.