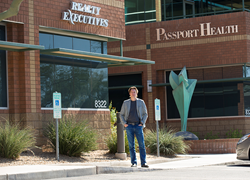 I’m excited to know that the Realty Executives brand is in the best possible hands for future growth.

Realty Executives International majority owner and CEO David Tedesco is excited to announce the acquisition of the remaining shares of the company from former President and co-owner Rich Rector. Tedesco is the founder and CEO of True North Companies, an investment firm that owns a number of businesses in the real estate, healthcare, aerospace, and entertainment industries. True North Companies first acquired majority ownership of the franchisor in 2014 and has since been focused on growth, technological advancements and system improvements.

“Rich and his family began building a business with innovation and entrepreneurial spirit at its core 50 years ago,” says Tedesco. “Owning 100% of the company frees us up to pursue our growth strategy even more aggressively, with our focus on expanding our network of high-performing brokers, agents and teams,” Tedesco adds.

“I’m excited to know that the Realty Executives brand is in the best possible hands for future growth,” says Rector. “My wife and I have been working on succession planning for a number of years. This is the final step in our plan. We brought David and the team at True North on and could not be happier with the progress that’s been made.”

True North Companies has spent the last three years rebuilding Realty Executives International. In addition to replacing the entire management team, the firm has refined the brand, replaced third party vendors with a suite of proprietary technology tools, and achieved best-in-class customer service. Realty Executives International also recently launched an aggressive growth campaign, with coverage in major industry outlets, such as RISMedia’s Real Estate magazine, highlighting future plans for the company. The franchisor expects to grow to 25,000 to 30,000 agents within the next few years.

Established in 1965, Realty Executives International is one of the largest and most established real estate franchise systems in the world today, with over 8,000 agents and 500 offices globally. The company offers disruptive, flexible pricing models for unrivaled mobile technology, business tools, training and service while providing protected territories to qualified franchisees worldwide. The Scottsdale-based, privately held company has been ranked as a leader in the real estate industry by publications like Entrepreneur, Success and Inc. magazines. For additional company information visit http://www.RealtyExecutives.com.