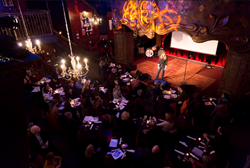 While “La La Land” certainly put movie musicals back into the limelight of modern Hollywood cinema, the New York Film Academy Musical Theatre program has consistently continued to keep the genre on the forefront of its curriculum. Since 2012, the program’s Two-Year Conservatory has developed original movie musicals in order to prepare students not only for the stage but also for careers in the film and television industry.

“A highlight of this experience is when students go to a professional studio and work closely with the engineer and the film's music director to record their final vocal tracks,” said NYFA Chair of Musical Theatre, Mark Olsen. “No other program can provide this level of professional support.”

Each film consists of original music and stories that feature collaborations with industry professionals such as Tony Award-winner James Monroe Iglehart and Tony Award-nominee Charlotte D’amboise. While these respected and well-known Broadway names draw attention to each musical, it is the students who remain the stars of the films.

"Musical theatre students get the experience of not only having original material written and composed just for them, but also the opportunity to record that material in a professional studio, and perform to that recording in a movie musical,” added David Klein, Senior Executive Vice President of the New York Film Academy. “The education experience in the NYFA Musical Theatre Program is unsurpassed.”

Over the past few years, NYFA’s movie musicals have touched on a range of topics — from “The Ghosts of Ethan Dean,” a cautionary drama about addiction, to “Landed,” which follows a group of expats trying to make it in New York. Each film showcases a modern musical paradigm with an edgier subject matter with the hopes of encouraging aspiring performers and theater producers to confront issues that truly speak to millennials.

NYFA’s more recent productions of “Seeking Alice,” “Landed,” “Streetwrite,” and “Gingerbread House,” have all screened at film festivals across the country, including the Manhattan Film Festival, NewFilmmakers NY, the Bare Bones International Film & Music Festival, and others.

"Over the years we have had the honor of screening the great work of numerous New York Film Academy students,” said Manhattan Film Festival Director, Philip Nelson. “We are thrilled to celebrate our 11th annual edition with a film program featuring NYFA movie musicals. The talent speaks volumes of both the students and the entire NYFA organization."

“Landed,” by Nathan Brewer, is scheduled to screen at the Fifteenth Annual Garden State Film Festival on March 30, and the film will air in the Tampa Bay area later this year on the Tampa Bay Arts & Education Network.

“It is an honor and a privilege to be able to present films like ‘Landed’ by Nathan Brewer among the hundreds of true indie films presented at our event each year,” said Diane Raver, Garden State Film Festival Founder. “We hold dear the ability to screen films from all nations, cultures, and viewpoints as the epitome of freedom of speech and expression we hold dear.”

With locations all around the world, the New York Film Academy has grown into an international film and performing arts school with a focus on learning by doing, providing its students with hands-on instruction. Students can choose to enroll in one of the Academy’s MFA, MA, BFA, BA, and AFA U.S. accredited degree programs and short-term workshops in filmmaking, acting for film, photography, producing, 3D animation, cinematography, screenwriting, documentary filmmaking, game design, musical theatre, broadcast journalism, music video, graphic design, illustration, and digital editing.

The New York Film Academy’s Florence, Italy location holds film and acting programs in a renovated renaissance era building, across the street from Le Cappelle Medici, moments away from the Duomo.