On their own, the average viewer creates a bundle with 9 networks, at a cost of $66 per month. 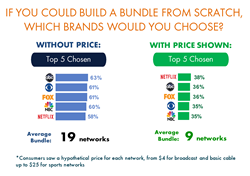 When viewers see a price per network, the average size of the bundle they build is cut in half (and Netflix becomes the most chosen brand to include)

Hub’s new study, “Let’s Get Ready to Bundle,” confirms that consumers would prefer a TV service model where they select, and pay for, only the individual networks they’re most interested in watching.

How do consumers want to pay for TV?

If they could build their own bundles, which networks would they choose (and how many)?

First, they were asked to select all of the brands they would choose if they were building their own TV bundle.

Then, respondents completed the same exercise—only this time with an approximate monthly price attached to each network. The prices ranged from $4-$7 for broadcast and basic cable networks, $8-10 for premium networks, $10-$15 for each SVOD, and $20-$25 for sports networks. With a price included…

“The current bundled-network approach to TV service gives consumers access to a fairly large number of networks they never watch, networks they assume they’re paying for,” said Peter Fondulas from Hub, who co-authored the study. “And in their mind, paying for something they don’t use is an instant sign of poor value. They instinctively see à la carte as an ideal solution, although in an exercise like this, they see that per-network prices can add up quickly—and severely limit their viewing choices.”

“This research underscores what we’ve seen in other studies: it’s not the price of pay TV consumers object to, so much as how much of that price is going to content that they don’t use,” said Jon Giegengack, co-author at Hub. “This is an environment where SVODs—as aggregators with both original content and shows from other networks—provide especially good ‘bang for the buck’. So it’s interesting, but not surprising, to see so many consumers include them in the bundles they’d build themselves if they could.”

“Let’s Get Ready to Bundle” was conducted among 1,500 US consumers with broadband and who watch at least 5 hours of TV per week. The data was collected in January 2017.An infographic and excerpt of the report are available as a free download from Hub Entertainment Research.

Hub Entertainment Research is a market-research firm with deep expertise in television, movies, gaming, music, publishing, and sports: anywhere that entertainment and new technology overlap. In the television industry, Hub analysts work with MVPDs, networks, content creators, and digital distributors. Our job is to help our clients negotiate new risks, act upon emerging opportunities, and reveal the clearest paths to success in a changing marketplace. For more information, please visit us at http://www.hubresearchllc.com.